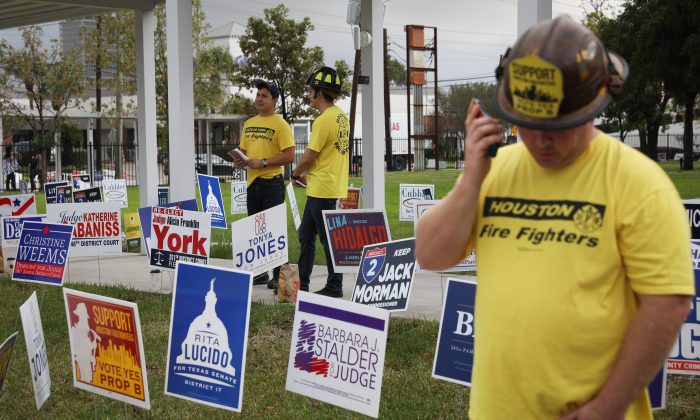 Firefighters encourage voters to vote on a proposition that would raise their pay outside the Metropolitan Multi-Service Center polling place on Nov. 6, 2018 in Houston. (Loren Elliott/Getty Images)
Election Integrity

Officials in Harris County, Texas, approved a potential lawsuit against the state’s Secretary of State’s Office over a random drawing that will mean a second election audit for the state’s most populous county.

The county, which includes Houston and has more than 4.8 million residents, is currently undergoing a state-run forensic audit of the 2020 election. The Democratic-controlled county allowed drive-thru and 24-hour voting during the COVID-19 pandemic, which prompted the scrutiny.

State auditors are in phase two of the audit, after about 3,000 potential noncitizens were found on the voter rolls. The county is now attempting to verify the citizenship of those flagged by the state.

The most recent election problem in Harris County occurred during the 2022 primaries, when 10,000 votes were found after the election.

Democrats see the additional audit as pointless, saying that the state’s elections are secure and that Republicans have bought into former President Donald Trump’s calls for investigating claims of potential election fraud.

Harris County Attorney Christian Menefee, a Democrat, told the Harris County Commissioners Court during their Aug. 2 meeting that the secretary of state’s drawing names from a bucket was akin to a “sketch comedy show.”

Menefee questioned the validity of the drawing, saying that the video of the selection didn’t show the entire process. He complained that Harris County wasn’t given notice of the drawing—which the secretary of state’s office denied.

“The camera doesn’t show the paper that was pulled from the bucket,” he said during the meeting. “All these things taken together make this highly suspicious.”

Precinct 1 Commissioner Rodney Ellis suggested during the meeting that Biden’s Justice Department get involved so that “somebody can audit the auditors.”

The commissioners voted during the meeting in favor of pursuing legal action against the secretary of state’s office.

Harris County is one of four counties up for a new audit. Cameron County was selected as the second “large county” to be audited. Guadalupe and Eastland counties were chosen in the small county category.

Acting Harris County Elections Administrator Beth Stevens told The Epoch Times in an email last week that the office would cooperate with all audits.

That means local and state elections will be audited through the 2022 midterm elections in the four counties. The audits are part of an election integrity law passed by the state’s Republican-led legislature last year.

The election integrity law requires the secretary of state’s office to select four counties to be randomly audited every two years—two with a population of more than 300,000 and two counties with lesser populations. Eighteen of Texas’s 254 counties have populations greater than 300,000, meaning the state’s large urban counties will be audited more frequently.

The secretary of state’s office defended the drawing in an Aug. 3 statement, saying that nothing untoward occurred and noting that the drawing was done on camera, even though that wasn’t a requirement.

“The suggestion that Harris County—or any other county—was deliberately chosen for a randomized election audit is completely false. Unfortunately, this is a counterfactual, delusional conspiracy theory that some officials in Harris County have chosen to perpetuate,” Taylor wrote.

State Sen. Paul Bettencourt, a Republican from Houston, told The Epoch Times in a text that filing a lawsuit over the drawing would be the most frivolous act yet by the Democrats.

“There were documented election irregularities across Texas in 2020,” Bettencourt said.

He pointed out that irregularities occurred during the March primary elections in Harris County, which prompted election administrator Isabel Longoria to quit.

While Longoria served as election administrator, Harris County missed the mandatory 24-hour state deadline to have all ballots counted. During the weekend following election day, officials announced that about 10,000 mail-in ballots from 6,000 Democratic voters and 4,000 Republican voters were discovered missing from the original election night count.

In December, the secretary of state’s office announced the results of the first phase of the 2020 election audit that focused on four of the state’s largest counties—Harris, Collin, Dallas, and Tarrant.

The preliminary findings included more than 11,000 potential noncitizens registered to vote statewide. Of these, 327 records were identified in Collin County, 1,385 in Dallas County, 3,063 in Harris County, and 708 in Tarrant County. At the time of the announcement, Dallas County had canceled 1,193 of these records, with Tarrant County canceling one. Neither Collin nor Harris had canceled any potential nonvoting records at the time.