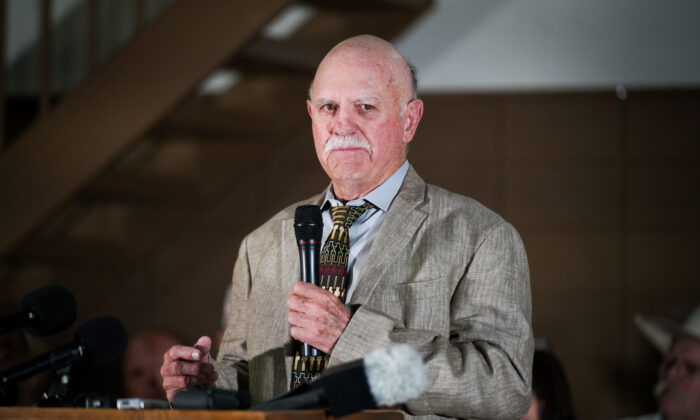 KINNEY COUNTY, Texas—Local officials in small Texas counties are calling on Gov. Greg Abbott to label the border crisis an “invasion” and use his constitutional authority to stop illegal immigration.

Kinney County Judge Tully Shahan signed a local disaster declaration on July 5 requesting that Abbott “immediately prevent and/or remove all persons violating the sovereignty of Texas and that of the United States.”

Shahan refers to provisions under the U.S. Constitution, including Article IV, Section 4, which states, in part, “The United States shall guarantee to every State in this Union a Republican Form of Government, and shall protect each of them against Invasion.”

Article I, Section 10 of the U.S. Constitution states, in part, “No State shall, without the Consent of Congress … engage in War, unless actually invaded, or in such imminent Danger as will not admit of delay.”

The related provision in the Texas Constitution states that the governor can call upon the state’s National Guard and militia forces “to execute the laws of the State, to suppress insurrections, and to repel invasions.”

At a press conference on July 5, Shahan said a smuggler recently fired his .22 pistol into oncoming traffic while trying to evade state troopers who were pursuing him. No one was injured, but a local woman later counted 10 bullet holes in her vehicle.

“The groups [of illegal aliens] are coming in camo. It makes you wonder. They’re not here to pick flowers,” Terrell County Judge Dale Carruthers told The Epoch Times. She owns a ranch that borders Mexico, and her county shares 91 miles of international border.

Carruthers said a young woman who was recently apprehended within a group of illegal aliens had been gang-raped by the men in the group along the way.

The Kinney County declaration cites the more than 3.2 million illegal aliens encountered along the southern border since President Joe Biden took office in January 2021, as well as the increasing number of overdose deaths caused by drugs being brought over the border.

“The sophisticated human smuggling and drug trafficking organizations that facilitate these criminal acts are spearheaded by violent international drug cartels who have operational control over our unsecured U.S.–Mexico border,” the declaration states.

“Whereas the ongoing humanitarian crisis on the Texas border is not acceptable, and has resulted in a security threat and humanitarian disaster with overwhelming consequences to the residents of Kinney County and Texans alike,” the declaration states.

During the most recent county commissioners’ meeting, Shahan had to leave halfway through to officially pronounce ​​dead an illegal immigrant from Mexico whose body had been found on his ranch. It’s the fifth body found this year, according to the sheriff’s office.

Prior to 2021, one dead body per year was the average for the county.

During May, the Kinney County Sheriff’s Office recorded 4,200 illegal aliens walking through local ranches after crossing from Mexico. The county shares 16 miles of border with Mexico, and most of its 1,400 square miles is remote ranchland.

Kinney County Attorney Brent Smith, who helped draft the declaration, said that while Abbott isn’t obligated to do anything about the declaration, he hopes more Texas counties will join to apply more pressure on the governor.

“This is just basically a plea for help to the governor. And the counties on the border who are living through this nightmare every day—the things that we see tell us it’s an invasion. We’re the ones witnessing it,” Smith told The Epoch Times.

Carruthers said her county’s commissioners will ratify the declaration on July 11 and she expects to hear from Abbott soon after.

Texas is waiting for its attorney general, Ken Paxton, to write an opinion in response to a query submitted by state Rep. Matt Krause on March 28.

“The Biden Administration has been so inept or apathetic to the plight of Texas and other border states, that it very well could rise to a violation of Article 4, Section 4 of the U.S. Constitution,” Krause wrote in a Facebook post that accompanied a copy of the official letter.

“So, today, I asked the Attorney General for an official opinion on whether that violation has occurred here in Texas.”

Smith said he had expected Paxton’s opinion to be published by now and suggested the reason it hasn’t been is “likely political pressure.”

Meanwhile, a legal opinion published by Arizona Attorney General Mark Brnovich on Feb. 7 addresses the “invasion” question. His opinion centers around the definitions of “actually invaded” and “invasion” and whether the federal government has been derelict in its duty to protect.

“The on-the-ground violence and lawlessness at Arizona’s border caused by cartels and gangs is extensive, well-documented, and persistent,” the opinion reads. “It can satisfy the definition of ‘actually invaded’ and ‘invasion’ under the U.S. Constitution.”