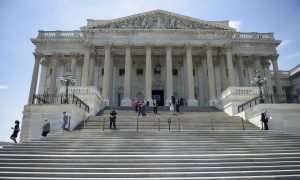 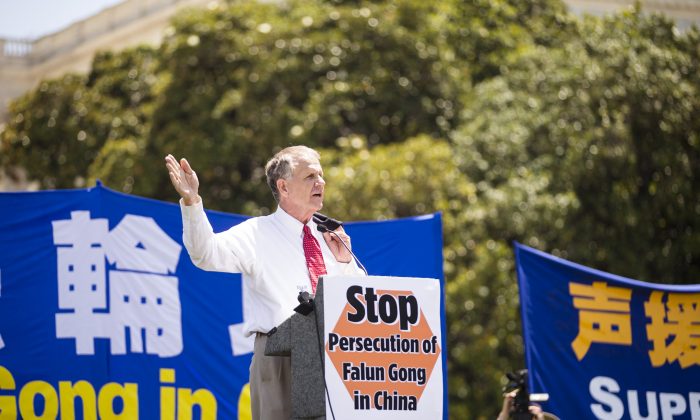 Ted Poe (R-Texas) speaks at a rally at the U.S. Capitol, in Washington, D.C., supporting Falun Gong and pushing for congress to take action to help end the Chinese regime 16 year persecution of the practice on July 16, 2015. (Edward Dai/Epoch Times)
China

Texas Congressman Ted Poe on Crimes Against Humanity, Lawsuits, and Liberty in China

WASHINGTON—Ted Poe, a Republican representing Texas’s 2nd district in the House of Representatives, has long been wary of the military threat posed by China, and also the extent of abuses of human rights that take place at the hands of the Communist Party’s security forces.

On Feb. 2, Rep. Poe spoke with Sherry Dong on these topics and more. Following is an edited selection of his remarks.

Epoch Times: Chinese officials say that they no longer use the organs from executed prisoners. Do you believe them?

Rep. Poe: I don’t believe them. Why? I used to be a judge, and when people were accused of crimes, especially when they were guilty, they always denied that they were guilty of the crime. We need some evidence that the Chinese government is not harvesting organs anymore. And they won’t produce any evidence. Open up the centers where all of these atrocities took place so that the world can see, especially so the Chinese people can see that this is not taking place anymore. The Chinese government won’t do that. Why? Because they have something to hide. They are hiding the truth. I can think of no more despicable and inhumane thing that a country can do than harvest the organs of its own people for sale on the marketplace. There is nothing … I cannot think of anything worse. So, the Chinese government needs to come clean, they need to make sure that they aren’t doing this, and then be able to produce the evidence—which I don’t think they can—that they have closed down these places that harvest the organs of the Chinese people. And so, I am very skeptical about whether this has stopped or not.

Epoch Times: Can you discuss your views on the character of this crime?

Rep. Poe: Well, organ harvesting: you take a human being, and you are taking the organs of that person, and selling them or using them for other purposes. I cannot think of anything worse. It is awful; it is barbaric; it is inhumane; and anyone that is responsible for such conduct, or any government that is responsible for such conduct, should be held accountable by the people of that nation, and by the world, because it is violation of human rights to its ultimate extreme.

Epoch Times: Another topic. As you are probably aware, around 200,000 Chinese citizens have filed criminal complaints against the former leader of the Chinese Communist Party, Jiang Zemin, for his role in initiating the persecution of the Falun Gong spiritual practice. What is your assessment of this effort?

Rep. Poe: I’m a former judge. I spent a long time as a judge in Texas. And people who have been accused of crimes, atrocities, should be tried, and it should be found out, publicly, whether or not they are guilty or not guilty. Give them a trial… And I think he should have a trial—we should get the people there, and the evidence, let him defend himself, and have a trial. The world deserves it. The people of China deserve it. The Falun Gong deserve it. Give him a trial and do it now.

Epoch Times: If you were offering advice to the current Party leader, Xi Jinping, on this issue, what would it be?

Rep. Poe: Well, Xi has put in custody a couple of folks that are responsible or accused of these atrocities. That’s not the answer, either. The answer is to give the accused person a trial. Try the individuals, not just lock him up or his sons up, or put them under house arrest. That’s not solving justice. And justice demands that there be an open hearing to determine whethter these atrocities occurred, and if they did, the people responsible need to be held accountable in the most severe possible way under the law. Hold a trial. Do it now, and quit delaying it. Humanity, the Falun Gong, deserve their day in court as well.

Epoch Times: What do you think the role of the United States should be, if any, in this process?

Rep. Poe: Well, I think the United States—members of Congress, the citizens of the U.S., and people who have ties to China—should point out these human rights violations, and that they need to be tried. The people need to be held accountable for them.

Epoch Times: Do you have any remarks about the phenomenon of Tuidang, in which Chinese people renounce their ties to the Chinese Communist Party?

Rep. Poe: Well, I am a person who believes in liberty. The communist government, wherever it is, and wherever it has been in the world, does not believe in the personal liberty of its citizens. Communism believes in the state. Everything, everybody lives for the state. I don’t believe in that. I believe that the state should exist for the citizens, not the citizens for the state. And now you have millions of Chinese who want freedom—good for them. No matter where we are in the world, or what we believe in, there is something in all of our deep souls, such that we believe, as people, in freedom and liberty. Communist regimes don’t promote liberty; they promote the state. And therefore I congratulate those people who have rejected the Communist Party, because they believe in freedom.