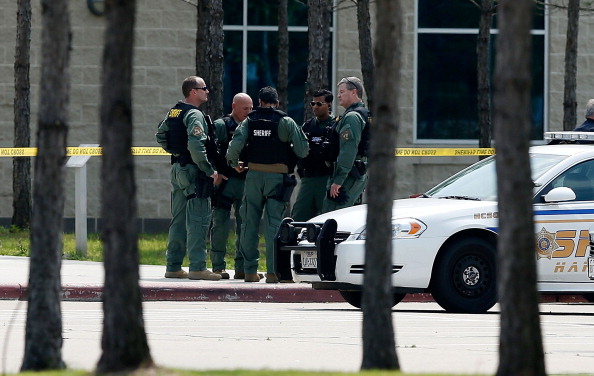 Texas college stabbing: Harris County Sheriff officers seal off the campus after at least 14 people were injured in a stabbing incident at the Cy-Fair campus of Lone Star College on April 9, 2013 in Cypress, Texas. (Scott Halleran/Getty Images)
US

Texas college stabbing: The suspect who stabbed 14 people at a campus in southern Texas was enrolled at the college and a fellow student student said he was trying to kill people before before his knife blade broke.

“We were sitting on the floor while a cop sat in a chair,” Lone Star College student Demond Lago told the Houston Chronicle. “I asked him, did you do it? And he said yes. Then the cop told us to stop talking to each other.”

Lago was arrested right before the stabbing spree for trespassing and he was waiting in police custody when he spoke with the suspect.

When the police officer was looking away, Lago talked to the suspect again. He said that he asked the suspect: “What were you trying to do? He said he was trying to go on a killing spree but the … blade broke.”

Lago described the suspect a white male with red hair, freckles, and a “troubled” persona.

Following the assault, two people were listed as being in critical condition.

Local photos of the suspect show a man with a medium build, a goatee, and wild hair sticking straight up, but his name was not released. Reports said he was enrolled at the college.

Harris County Sheriff Adrian Garcia said officers responded to the campus after receiving a call about a male “on the loose” stabbing people. He said it was not immediately clear what type of weapon was used.

“Some of the details in the call slip did indicate that students or faculty were actively responding to work to subdue this individual,” Garcia said, describing the man as being about 21 years old and enrolled at the college. “So we’re proud of those folks, but we’re glad no one else is injured any more severely than they are.”

Student Michael Chalfan said he was walking to class when he saw a group of police officers running after the suspect. He said one of the officers used a stun gun to help subdue the man, who Chalfan said he recognized from a drama class last year.

Chalfan described the man as “eccentric,” saying he often wore gloves and was known to carry stuffed animals. He said although the man was teased by fellow students, he remained friendly.

“I’m surprised because he didn’t look like he was hateful to the world,” Chalfan said.