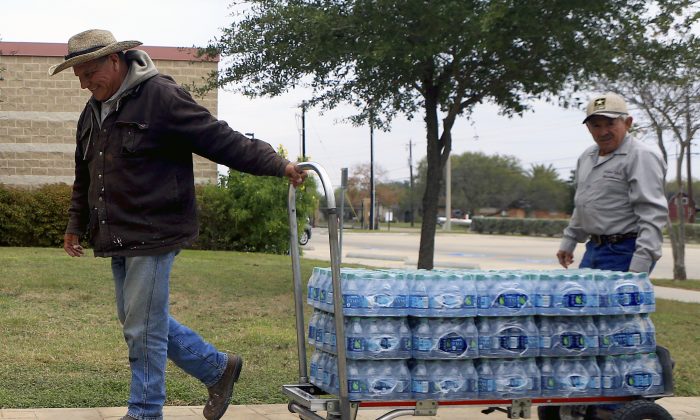 CORPUS CHRISTI, Texas—A harmful chemical from an industrial plant leaked into the water supply in Corpus Christi, forcing school closures, disrupting commerce and causing a run on bottled water at supermarkets in the Gulf Coast city.

As the frustrations grew late Thursday night—a day after the spill—the mayor said he didn’t think the release of the chemical extended beyond the industrial district. He said though that officials were still waiting for results from testing by the Texas Commission on Environmental Quality.

“We are pushing very hard to get our water turned on as soon as we can,” McQueen said.

City spokeswoman Kim Womack told KRIS-TV that officials did not find a “backflow preventer” at the site. “They’re saying there is one and we’re telling them ‘show us,'” she said.

“In the simplest terms, someone was careless when they were injecting chemicals with a pump and … when the injection occurred it crossed over into our water system,” she told KRIS-TV.

Womack told the station that they were not releasing the name of the company leasing the plant because they are still trying to work with it.

“We feel like if we release their name, they will shut down and not work with us,” she said.

McQueen said that the “third party” responsible for the spill will be held “accountable.”

Anywhere from three to 24 gallons of the chemical got into the water system. It is an asphalt emulsifier that can burn the skin in concentrated amounts.

“We haven’t confirmed that this product is even in the flow system,” McQueen said.

During a short news briefing, angry residents scolded city leaders for not fully explaining how the water supply might have been contaminated.

After Womack briefly spoke and talked about an anonymous donor providing the city 27,000 cases of bottled water, a group of residents began chanting, “What do we want? Clean water! When do we want it? Now!”

City officials warned in a statement that “Boiling, freezing, filtering, adding chlorine or other disinfectants, or letting the water stand will not make the water safe.” They didn’t indicate when they might lift the order not to use the water.

City councilman Michael Hunter told the Corpus Christi Caller-Times early Thursday that it was unlikely that the leaked chemicals were concentrated enough to do harm, but that officials must take every precaution.

He said the problem was first reported by a local company that said the water coming from its faucets had a sheen. He did not identify that company.

The discovery of the leak led to the closure of schools, disrupted businesses and led to long lines at grocery stores, as residents stocked up on bottled water. At least two large retailers, H-E-B and Wal-Mart, sent for more bottled water to be shipped in.

The TCEQ said it has initiated “multiple measures,” including sampling “to determine the extent of potential impact.” TCEQ said agencies it’s coordinating with include the Environmental Protection Agency.

It is just the latest in a string of water scares for this Gulf Coast city of 320,000 people.

In May, Corpus Christi officials issued their third boil-water advisory in a year. That notice lasted two weeks and officials at the time said it was largely a precautionary measure taken after nitrogen-rich runoff from rain flowed into the water system, resulting in low chlorine disinfectant levels in the water supply.

Boil-water notices were issued last year because of elevated levels of E. coli and another for low chlorine levels, the Caller-Times previously reported. The notices mirrored two others that were issued in 2007.

City crews have worked to reconfigure some water mains to ensure that water keeps circulating and to prevent bacteria growth. But an overarching concern is an old water system where more than half of 225 miles of cast-iron pipe needs to be upgraded. Many of the pipes were installed in the 1950s and when they decay they’re prone to collapse or to slow water flow, allowing bacteria to fester.

Civic leaders have expressed concern that recurring water advisories and warnings could cause long-term harm to the area’s vibrant tourism business.