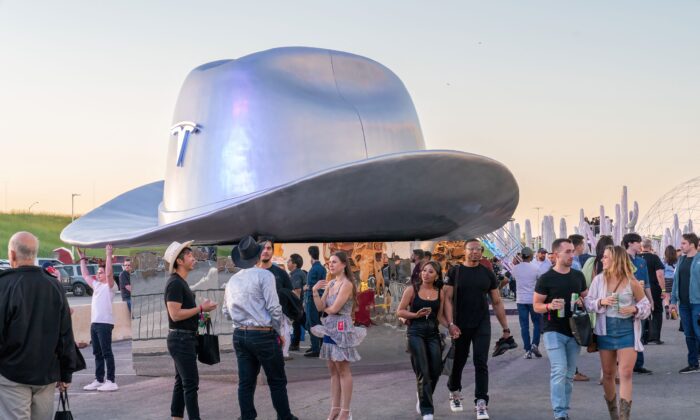 A giant cowboy hat is on display outside the Tesla Giga Texas manufacturing facility during the "Cyber Rodeo" grand opening party on April 7, 2022 in Austin, Texas. (Suzanne Cordeiro/AFP via Getty Images)
Texas

Texas is showcasing a stronger performance in the labor market when compared to the nation overall, according to a report by labor market analytics platform LaborIQ by ThinkWhy.

The “total annual voluntary quits rate” in Texas, at present, stands at 36.2 percent, which is higher than the national level of 33.8 percent, the most recent data from LaborIQ shows. Higher quit rates are a sign of employee confidence about getting another job—an indication of a strong economy.

The 2022 LaborIQ Market Index lists three Texas cities in the top 10, with Dallas-Fort Worth-Arlington at the top spot, Austin-Round Rock in the second, and Houston-The Woodlands-Sugar Land in the sixth.

Texas is the only state with three cities in the top 10, followed by Florida, with two cities. Both are Republican-led states. The LaborIQ Market Index takes into account job gains, population growth, education, wage growth, and more.

Compared with pre-pandemic levels, overall employment grew by 30 percent in Texas, while it declined by 0.5 percent nationally. Last year, Texas added 694,400 jobs, which is more than all the jobs added by the bottom 25 states.

Population is a key factor driving growth in Texas, the LaborIQ report states. Between 2010 and 2020, Texas ranked number one in population gain, with four million individuals added to the state. With regard to population growth, Texas came in third, with a growth rate of 15.9 percent.

In May, the state added 74,200 jobs, according to a June 17 news release by the Texas Workforce Commission. This is the biggest increase in 2022. For the seventh consecutive month, Texas set new employment highs. In the one year between May 2021 and May 2022, the state added 762,400 positions.

As demand for employees keeps rising, salaries also are increasing. Office jobs in capital city Austin now pay around 25 percent more than they did in 2019, an analysis by ThinkWhy shows.

For the remainder of 2022. LaborIQ is expecting inflation and high interest rates to negatively affect consumer spending and slow down the state economy. In response, businesses will only open fewer jobs, backfill roles at a slower pace, and even reduce their workforce.

The good news is that competition for talent will become less fierce. Plus, employee turnover rates are calculated to moderate when compared with the past 12 months. But even with this economic disruption, LaborIQ predicts Texas to remain one of the strongest job markets in America.