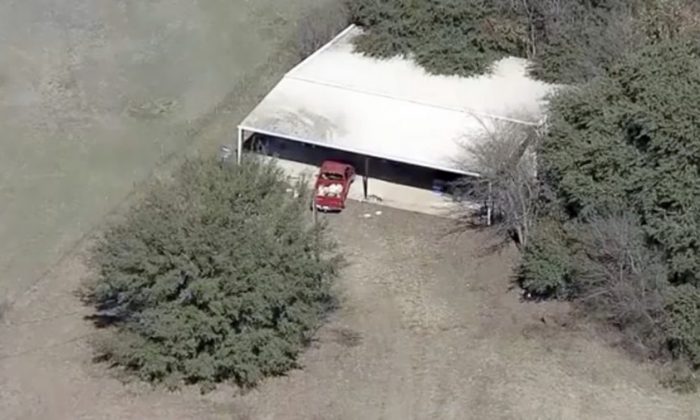 Part of the property where deputies found two young, malnourished children locked together in a dog cage near Rhome, Texas on Feb. 12, 2019. (AP Photo/KDFW-FOX4 News)
Crime and Incidents

DALLAS—Four malnourished siblings, all aged 5 or younger, have been placed in foster care after authorities found them hungry and thirsty in a North Texas barn, two locked in a dog cage, and the others smeared with excrement, authorities said Feb. 13.

Law enforcement found the children Tuesday morning while responding to a domestic disturbance call at a property near Rhome, about 20 miles north of Fort Worth.

The three boys and girl were released from a hospital Tuesday evening and placed into foster care, a Texas Department of Family and Protective Services said. The agency did not say if the children have been placed together or split up.

4 malnourished children are in foster care after authorities found 2 of them locked in a dog cage and 2 more smeared with excrement in a North Texas barnhttps://t.co/DowvI4Y0bv

Wise County Sheriff Lane Akin said deputies found the oldest two kids locked in a 3-by-3 foot cage and the other two were filthy and only partially clothed. Akin called it the worst case of child abuse he has seen in his 44-year career.

Paige Isabow Harkings and Andrew Joseph Fabila, who are both 24, were each charged with four counts of criminal child endangerment and were being held in the Wise County Jail. His bond was set at $60,000 Wednesday afternoon, while hers was set at $75,000.

OMG – this kind of insane mistreatment of children happens in our country. Once again “you need a license to go fishing but any sob moron sick mf’er can have a baby” https://t.co/UzInL7o2sD

Harkings was also charged with aggravated assault, and Fabila was taken to an area hospital to have “numerous lacerations on his face” treated before being jailed, the sheriff’s office said in a statement. She is the mother to all four children, while he is the father of one, according to authorities.

The 4-year-old girl and the boys, aged 5, 3, and 1, are “doing OK,” according to Department of Family and Protective Services spokeswoman Marissa Gonzales. She declined to share details of their condition and treatment.

Akin said the children were starving and that a plentiful supply of food had been locked inside cabinets and a refrigerator in the barn. Deputies fed the kids and gave them water before taking them to the hospital, according to the sheriff’s office.