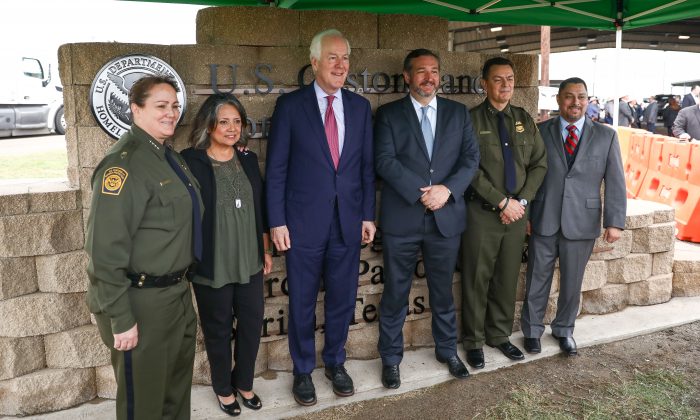 Vega was shot and killed on Aug. 3, 2014, while out fishing with his wife, children, and parents near Santa Monica, Texas.

As two illegal aliens approached the family and attempted to rob them, Vega attempted to draw his weapon, but was shot in the chest. His father was also shot and wounded.

Both assailants fled the scene and were arrested a short time later.

In 2016, Vega’s murder was re-determined to have been in the line of duty.

“Their efforts in reclassifying agent’s Vega’s murder as a line-of-duty death, and in moving legislation forward to rename the checkpoint in [his] honor, are greatly appreciated,” Karisch said. “The dedication of this checkpoint today will preserve his legacy for generations of agents who will continue to serve this great nation.”

Cornyn sent a letter to the Customs and Border Protection Commissioner in 2015 to request Vega’s death be reclassified as line-of-duty, allowing his family to receive the benefits of such a classification. A year later, he sent another letter, along with Reps. Michael McCaul (R-Texas) and John Carter (R-Texas), and was that time successful.

In 2017, a bill introduced by Cornyn and co-sponsored by Cruz to rename the Sarita checkpoint in Vega’s honor passed the Senate.

Cruz said Vega spent his life defending others, first as a Marine and then as a Border Patrol agent.

“He tragically gave his life doing what he had spent his entire life doing, which is defending others, defending his family, from two criminal illegal aliens who had been deported previously,” Cruz said. “We’re today with a moment of sadness, but also with deep, deep gratitude.”

Vega’s widow, Paola Andrea Brown, said Vega’s fellow Border Patrol agents have been by the family’s side since day one.

“We’re grateful for each and every one of you,” she said. “My boys lost their father, I lost my best friend. Everyone tells me that I’ve done such a great job in raising these boys, but little do they know, these boys have raised me.”

“I know your father is so proud of all three of you.”

The Javier Vega Jr. Border Patrol checkpoint is situated on U.S. 77 in southeast Texas, between Brownsville and San Antonio.