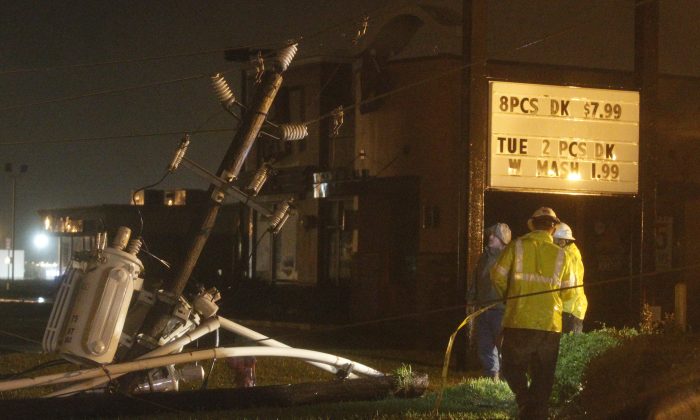 Center Point crews work to restore power after a power line fell on Highway 60 due to high winds from Tropical Storm Bill on Tuesday, June 16, 2015, in Wharton, Texas. (AP/Patric Schneider)
US

SAN ANTONIO—Flood-weary Texans were bracing for heavy rain and possible flooding Wednesday as Tropical Storm Bill was downgraded to a depression and continued to creep inland.

The center of the storm was expected to move northward just west of the Interstate 35 corridor, dropping 4 to 5 inches of rain on areas of Central Texas still cleaning up and recovering from Memorial Day weekend floods that left 14 dead and two missing along the Blanco River alone in Blanco and Hays counties.

The effects of the storm are being felt beyond Texas, as rain fell in Oklahoma and other states, including Missouri where a 60-year-old motorist died when floodwaters swept his car from the road.

The National Hurricane Center said the storm was moving north at about 13 mph and on Wednesday morning was moving into the Dallas-Fort Worth metro area. Flash flood watches and warnings were in effect for the area, and Gov. Greg Abbott was expected to receive a briefing from state emergency officials Wednesday morning in Austin.

In North Texas, Dallas authorities were monitoring road conditions and Arlington residents were picking up sandbags being offered for free by city officials.

According to projections by the National Weather Service, average rainfall through noon Wednesday for portions of Texas will be 3 to 6 inches, but isolated areas could see up to 12 inches. Arkansas and Oklahoma could get up to 9 inches of rain in the coming days, and Missouri could get more than 7. After last month’s historic rains and floods, the forecast was expected to complicate ongoing flood-containment efforts.

“We’re more vulnerable to flooding right now than usual because we just got through the wettest month on record,” Texas state climatologist John Nielsen-Gammon said.

The Memorial Day weekend storms brought widespread flooding to Oklahoma and Texas, killing more than 30 people overall. At one point last month, 11 inches of rain fell in some parts of the Houston area, resulting in flooding that damaged thousands of homes and other structures and forced motorists to abandon at least 2,500 vehicles across Houston.

Personnel from FEMA who were sent to Texas and Oklahoma after those storms were to remain in the region to help prepare for the tropical storm and help clean up in its aftermath, White House spokesman Josh Earnest said Tuesday.

Major flooding could occur along the Trinity River as it extends through East Texas, according to the weather service, with one portion northeast of Houston nearly 4 feet above flood stage Tuesday. The Guadalupe River north of Corpus Christi also was swollen as it ran more than 5 feet above flood stage.

Twisters were also a possibility Wednesday, with 21 counties in the eastern half of the state under a tornado watch until 7 a.m.