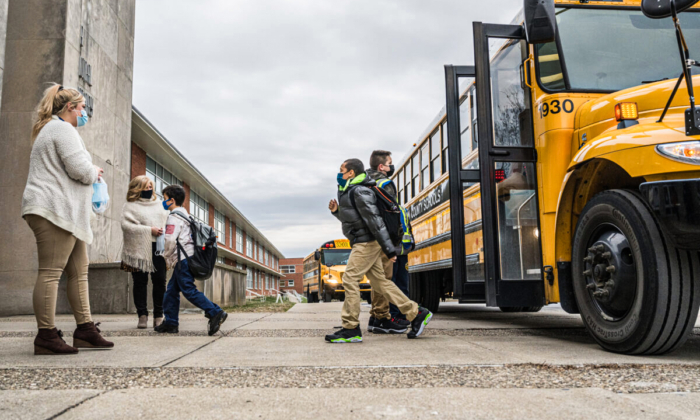 File photo: Teachers greet their students as they get off the bus at Carter Traditional Elementary School in Louisville, Kentucky, on Jan. 24, 2022. (Jon Cherry/Getty Images)
US News

Parental rights groups and politicians are perturbed about proposed Texas teaching standards that would widen the discussion of sexual orientation and gender in high school classes and replace the influence of the Bible on the U.S. Constitution with that of the Iroquois Confederacy.

The Texas State Board of Education (SBOE) called an emergency hearing on Aug. 1 to discuss the draft recommendations proposed by work groups and to collect feedback.

The draft recommendations are part of Texas Education Knowledge and Skills standards, which are required to be updated to include civics, history, and social studies. The state’s education code directs work groups to revise and update the standards.

“It’s just not appropriate,” said Mary Lowe, chairman of the Tarrant County Moms for Liberty chapter. “Sexual orientation has nothing to do with history or civics or social studies. You can be a good citizen, no matter what your sexual orientation is.”

The draft recommendations also propose reducing teaching on the U.S. Constitution’s First Amendment and replacing the influence of biblical law on developing the Constitution with that of the Iroquois Confederacy.

“I suggested the SBOE reject all of the draft recommendations and ask the work groups to remain true to the teaching of American history because if these are approved, our children will learn these [standards] for the next 12 years,” said Brooks, who was endorsed for election to the state board by Gov. Greg Abbott this week.

State Rep. Matt Shaheen (R-Plano) said of the proposed shortened teaching about the First Amendment, “It is vitally important to teach students about freedom of speech and freedom of religion.”

On the impact of the Iroquois Confederacy, Julie Pickren, a Republican campaigning for election to the SBOE representing District 7, said, “As far as I know, there is not a credible documented source that substantiates that line of thinking.”

The Iroquois Confederacy, also known as the League of the Iroquois, consisted of up to six upstate New York-based Native American tribes.

“That’s just liberal Democratic extremists trying to indoctrinate children,” Rep. Shaheen told The Epoch Times. “It’s totally unacceptable, and parents have an absolute right to be upset by that.”

Proposals to remove America’s mottos “E Pluribus Unum,” which is Latin for “Out of many is one,” and “In God, We Trust” also drew criticism.

Because of the negative feedback from multiple sources, the workgroups reconvened in Austin last weekend but have yet to release revised draft recommendations.

Shalon Bond, president of the Texas Council for Social Studies, who reviews what the workgroups recommend, declined to comment.

“State board members had the opportunity to speak for or against any of these items, and in that 12-hour meeting on Aug. 1, not one board member, Democrat or Republican, spoke for any of these particular items,” said Audrey Young, a Republican SBOE member who is vice-chair of the committee on instruction.

The next SBOE meeting is scheduled for Aug. 31.