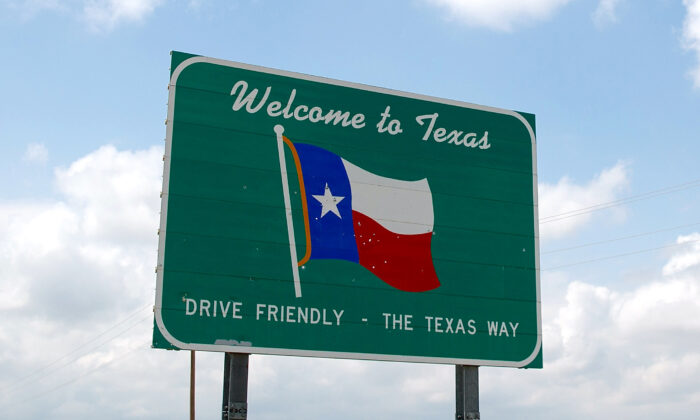 A 'Welcome to Texas' sign stands on the side of the road near Dalhart, Texas, on May 9, 2017. (Drew Angerer/Getty Images)
Viewpoints

How embarrassing. California has dropped to third place in the 2022 list of Fortune 500 company headquarters (HQ) by state. The top state is now Texas, followed by New York. Yet Texas’s population of 28.6 million people, per the 2020 U.S. Census, is 73 percent of California’s—and New York’s 19.5 million is half of it.

The totals now: Texas has 53 HQs, New York 51, and California 50. New York maintains the advantage of New York City still being the world center for finance, and California long has had Silicon Valley. But Texas has only a welcoming business climate with low taxes and regulations, beginning with a 0 percent state income tax rate.

Just last year, California was the No. 1 location for corporate HQs, with 53, tied with New York. Texas was third with 49.

To be fair, in recent years California and New York have competed for first place on the list. But this is the first time that Texas has catapulted to the top.

“Texas is the economic engine of the nation, and I am proud to announce that we continue leading the country now with the most Fortune 500 corporate headquarters,” Texas Gov. Greg Abbott said. “Thanks to our unmatched business environment, with no corporate or personal income taxes, a highly skilled and diverse workforce, easy access to global markets, and reasonable regulatory climate, Texas has more businesses relocating and expanding here in our state than ever before.”

I know several people who have made the move from California to Texas and love it—despite the much worse climate. For the wealthy, the lack of a state income tax is especially enticing. I’ve talked to rich people, and here’s how they think.

The top federal income tax rate is 37 percent. So the wealthy, after paying that, keep 63 percent of their income. In Texas, that’s the end of it.

Or add the two together: 37 percent plus 13.3 percent comes to 50.3 percent. That means half your wealth is taken away just by living in California.

Another aspect is that wealthy people run companies, which need good employees. California is a ludicrously expensive place to live because of sky-high land prices now higher than $1 million for a small house along the coast and a high 9.3 percent state income tax rate paid just by the middle class. That means it takes at least a family income of about $175,000 per year just to join the middle class.

Move to Dallas and the median home price is $322,000, and no state income tax is paid. Friends of mine have cashed out of their California condos and moved into two-acre spreads where their kids can frolic in a large yard.

Oh, and according to GasBuddy.com, as I write this, gas in Dallas is as low as $3.79 per gallon, compared to $5.79 in Anaheim. Fill up on the Arizona border—it’s $4.43 at Ehrenberg—before you head to Disneyland!

There’s one area of California that’s going gangbusters: government budgets. They’re so overflowing with tax dollars that the state enjoys a $97.5 billion “surplus,” which it’s trying to spend like Richard Pryor in “Brewster’s Millions.”

So far, the legislators can’t even agree to dribble a few drops back to the taxpayers who earned the money. On May 25, just before the Memorial Day weekend of travel, the Democratic majority in the Assembly refused to take up Assembly Bill 2547 by Assemblyman Adam Gray, a Democrat. The legislation would suspend the gas tax for one year.

The website of Gray—who, let me emphasize, is a Democrat—reads, “The new proposal, which comes as other legislative efforts appear to have stalled, would fully suspend the 51.1 cent excise tax on each gallon of gas for 12 months, while backfilling funding for transportation projects using the state’s multibillion-dollar General Fund surplus. Previous proposals were criticized for allowing oil companies to pocket the tax savings without guaranteeing lower gas prices for consumers.”

Perhaps the legislature will pass some version of AB 2547 at a later date, as even more California corporations and citizens head to greener—and cheaper—pastures in other states.