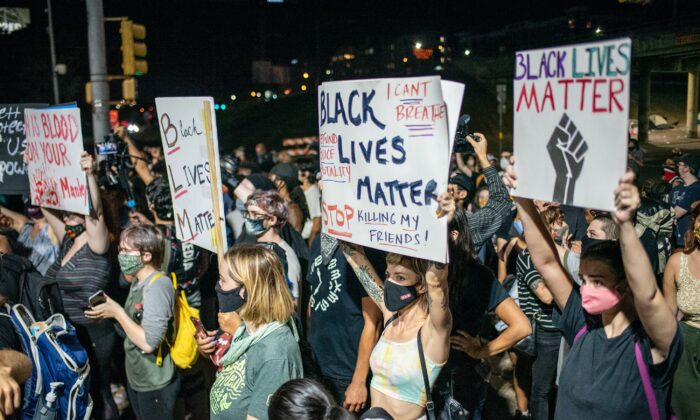 People hold up signs outside Austin Police Department after a vigil for Garrett Foster, a Black Lives Matter protester who was shot dead after allegedly brandishing his firearm at a driver, in Austin, Texas, on July 26, 2020. (Sergio Flores/Getty Images)
Censorship & Socialism

Texas Attorney General Ken Paxton announced an investigation after a video shot in Plano appeared to show a police officer allowing Black Lives Matter protesters and apparently armed Antifa-type agitators to block traffic before the officer reprimanded a driver who got out and confronted them.

“I instructed one of my top deputies to contact the Plano Police Chief to get more details. What he heard paints an even worse picture that the video alone depicts,” Paxton, a Republican, said in a statement on Monday.

The video went viral after OAN’s Jack Posobiec posted it via his Twitter account this week. It shows a man wearing a blue shirt telling the agitators to get out of the road before an officer tells him to get back away from the screaming protesters. He also is heard telling the officer, “Get these [expletive] people out of the way!”

Paxton’s statement asserted that Chief Ed Drain allegedly told the state attorney general’s office several different versions of what unfolded, including details about a weapon that an agitator was allegedly brandishing.

“First, the chief told my deputy that while the weapon drawn wasn’t a pistol, it was, in fact, a ‘pepper ball gun.’ In a separate conversation, the chief claimed it was a ‘Taser,'” the attorney general said. “In a recent Facebook post, the Department is now saying it was [an] ‘electronic control device.'”

He added, “Whatever it was, the police declined to pursue the leftist who brandished the weapon, and no charges are being pressed against him.”

Paxton then accused Drain of being “anxious to excuse the rioters” and said the chief allegedly told him that the police department has “to negotiate with these people.”

“Do you expect us to mass arrest the protesters? You know that’s not going to happen,” the chief also allegedly told Paxton.

The Epoch Times has contacted the Plano Police Department for comment.

The incident occurred on May 2 after protesters held a rally after the death of a man while in custody in the Collin County Jail, according to WFAA.

A police statement to the local outlet said that “a female reported that she was assaulted by a male who confronted the protestors [sic],” adding that “the officer did not witness” the alleged assault.

“The officer deescalated the situation by removing the male away from the crowd … After speaking with the victim and the suspect, and reviewing video footage of the incident, detectives filed an Assault-by-Contact charge with the Municipal Court against the male suspect,” the statement said.

But Paxton said that he believes the man who confronted protesters was unfairly charged, saying he slapped the woman’s hand away while protesters were blocking traffic.

Paxton further said that police officers around the United States are being “held back by politically motivated leaders, crippled by the woke agitators, now aiders and abettors to liberal lunacy.”

“I will never allow our beautiful Texas cities and neighborhoods to become Portland or Seattle or San Francisco because of the unchecked left,” he added.