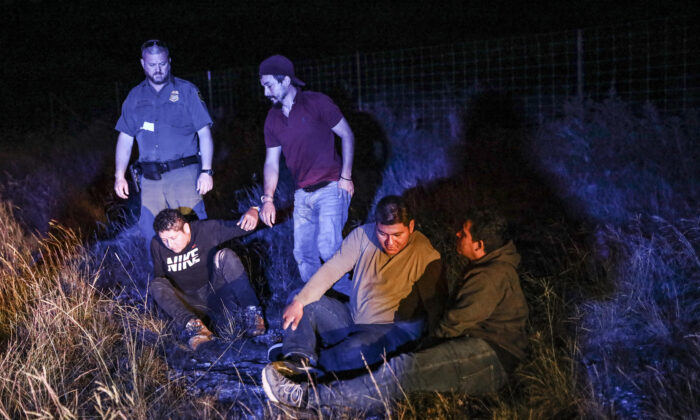 A group of illegal aliens is apprehended by law enforcement on a ranch in Kinney County, Texas, on Jan. 14, 2022. (Courtesy of Kinney County Sheriff's Office)
Immigration & Border Security

“Hundreds of thousands of illegal aliens are pouring over our border,” Paxton said in a statement on Jan. 25. “They are temporarily detained—if at all—before being released, and then make their way through your counties, cities, and property. They bring with them property destruction, theft, financial costs, risks of disease, crime, and the cartels.”

Border Patrol agents apprehended 1.3 million illegal aliens at the Texas-Mexico border in 2021. Hundreds of thousands more are estimated to have evaded capture. These individuals end up being smuggled in vehicles or walking through ranchland to evade law enforcement.

Ranchers and citizens have expressed frustration during the past year about being left to fend for themselves as their properties are damaged and their families are placed in danger.

They often want to know what they can do, including using force.

“We sympathize with the fears and desperation that Texans feel during these unprecedented times, but the use of force is a serious response that will likely lead to the actor being subjected to the criminal justice system, with very little predictability of the outcome,” Paxton’s document states.

Paxton said he prepared the information to help arm Texans with the “basic legal concepts to consider as Texans face these unprecedented challenges,” but makes the caveat that it’s not formal legal advice.

A border citizen in Del Rio, Texas, told The Epoch Times on Jan. 26 that eight illegal aliens with “huge backpacks” similar to the traditional bundles of marijuana, were seen, but not caught, on their property recently.

“Traffic here hasn’t slowed down at all—it just continues to get worse with illegal aliens,” the property owner, who has three young children, said. “They know there is literally no law enforcement working in our area and that they have a good chance of getting away every single time. We are now considered a ‘hotspot.'”

Paxton advises local officials to declare a state of local disaster, if required, which provides the authority to bring more assistance to the area. Four Texas counties declared local disasters in April 2021.

Texas Gov. Greg Abbott declared a state of emergency in about two dozen border counties more than six months ago and has deployed extra National Guard troops and state police to the border.

The number of Border Patrol apprehensions in Texas hasn’t dropped below 100,000 per month since last February, but local areas have started to prosecute illegal aliens for trespassing on private property.

Kinney County, which shares 16 miles of border with Mexico, has prosecuted the most, with more than 2,000 cases either resolved or in process. The sheriff last week said the groups of illegal aliens traversing the county are getting larger.

Paxton has sued the Biden administration six times over the border crisis, including for its narrowing of Immigration and Customs Enforcement priorities that allowed criminal aliens to be free, the stoppage of the Remain in Mexico program, and for disregarding its own COVID-19 rules while handling the surge of illegal immigrants..

“Local law enforcement, governmental officials, and Texans are left searching for answers and help. Solutions are difficult to come by.”

Paxton is meeting with 12 other attorneys general for a border summit in McAllen, Texas, this week. The attorneys general are from Arkansas, Alaska, Florida, Indiana, Kansas, Mississippi, Missouri, Montana, Oklahoma, South Dakota, Utah, and West Virginia.