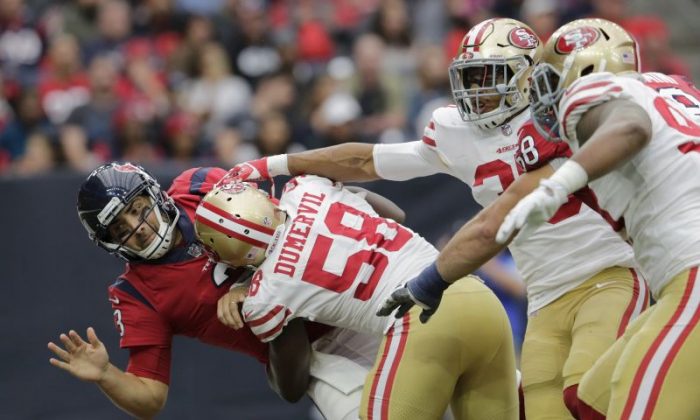 Tom Savage #3 of the Houston Texans is hit by Elvis Dumervil #58 of the San Francisco 49ers in the second quarter at NRG Stadium in Houston on Dec. 10, 2017. (Photo by Tim Warner/Getty Images)
Entertainment News

Two weeks after Houston Texans quarterback Tom Savage was hit hard and appeared to shake uncontrollably, the team won’t be disciplined for the way they handled his concussion symptoms.

During the Week 14 game against the San Francisco 49ers, Savage was leveled by a defender. Many on social media said the involuntary twitching he displayed was akin to a “seizure.”

FYI: Tom Savage was thrown back into the game less than 5 mins after this seizure due to a head injury.
Concussion Protocol™ in the @NFL is a mix between a sick joke and a disgusting charade. pic.twitter.com/5fLwZr0cSB

But despite that, Savage was allowed back on the field after he was checked out by the medical staff on the sideline. He was later taken to the locker room and was ruled out for the game.

The NFL and NFL Players Association said that allowing him to return to the field was “unacceptable.” Medical staff saw the “initial broadcast video,” they told ESPN—but they did not see the slow-motion replay of Savage twitching after the hit.

“The slow-motion video, which focused more directly on the fencing posture, was not broadcast until after the doctors had begun the sideline evaluation and thus was not seen by the medical staff prior to the evaluation,” a statement from the NFL and NFLPA said, according to the NFL Network.

“The Texans medical staff continued to monitor Mr. Savage after the initial evaluation and shortly after his return to the game, identified symptoms that had not been present during the sideline evaluation and took him to the locker room for further evaluation.”

Savage was placed on injured reserve for their Week 16 game. He was officially diagnosed with a concussion.

Texans coach Bill O’Brien defended the handling of the situation.

“At no point in my coaching career, have I ever passed the buck. In this case, I’m not passing the buck,” he said, according to the NFL Network.

A week ago, the Seattle Seahawks were fined $100,000 for handling the concussion protocol on Russell Wilson.