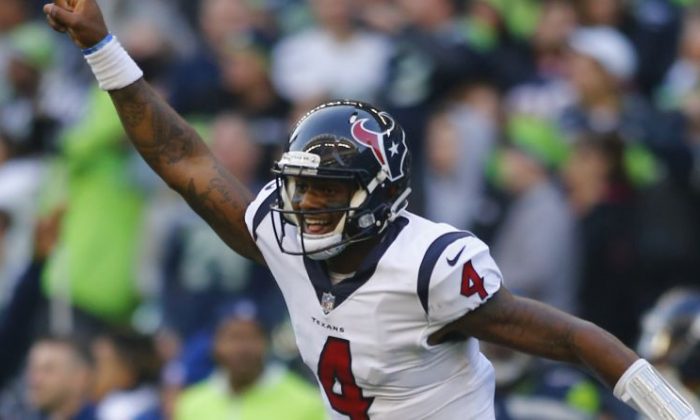 Quarterback Deshaun Watson #4 of the Houston Texans cheers as DeAndre Hopkins #10 scores a 72 yard touchdown against the Seattle Seahawks in the fourth quarter at CenturyLink Field on October 29, 2017 in Seattle, Washington. (Photo by Jonathan Ferrey/Getty Images)
Entertainment News

If the report is confirmed by the team, it likely means that Watson will be out for the remainder of the season. The NFL Network and the Houston Chronicle reported the injury development on Thursday.

Watson took over the starting job from Tom Savage during the season-opening loss against the Jacksonville Jaguars. He was tied for the lead in passing touchdowns, 19, while the Texans lead the league in scoring at 30.7 points per game.

The Texans will sign quaterback Matt McGloin, the Houston Chronicle reported. But Savage is slated to resume his role as the starter, according to the Chronicle.

Still reeling from the loss of superstar defensive end J.J. Watt, Texans will face the Indianapolis Colts on Sunday.