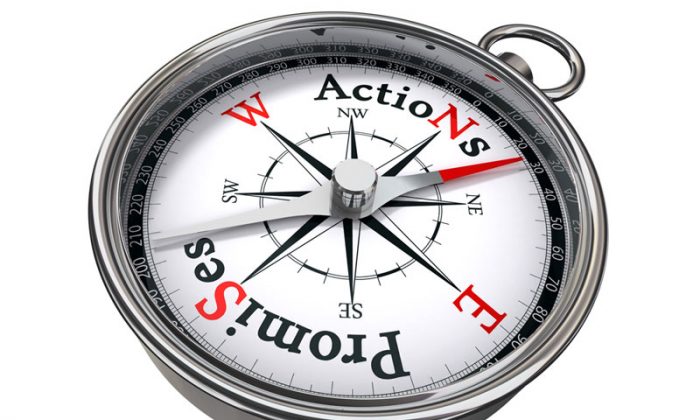 For believers in the possibility of progress in human affairs these are troubling times. There are enough political, economic and environmental problems to give even the headiest of optimists pause for thought. Most troubling of all, perhaps, the prospect of inter-state war – of a sort that seemed to have virtually disappeared – no longer seems such a remote possibility.

The big question now, as it always has been, is how do we encourage people to behave well? The ‘we’ in this question is ‘the West’, or slightly more accurately, those people who are a product of, and in some sense subscribe to, the values that were forged in the Enlightenment: liberalism, toleration, pluralism, secularism and rationalism. We could also throw in an interest in equality and emancipation, too.

Students who have been brought up in an era of political correctness are often taken aback when I suggest that I have no problem in making a judgment about the superiority of some values and practices over others. The emancipation of women for example is, I would have thought, an idea that at least half the world’s population ought to have little difficulty in supporting. The point that tends to be forgotten in such debates is that it is not only the direct descendants of ‘Western civilization’ who find such ideas attractive.

One of the most striking but generally unremarked aspects of the current stand-off between Vladimir Putin and the European Union is the role of ideas and values. True, we have all had to remind ourselves what ‘revanchism’ and ‘irredentism’ mean, but the obsession with archaic national identities only confirms how shallow and uncertain political and social progress has actually been in some of the more easterly parts of Europe.

While we may have become accustomed to the idea that Putin is devious, despotic and dangerous, what is less well recognized is that given the opportunity the oligarchs and opportunists who constitute the Russian state may not be entirely comfortable with the regime they have created either. Certainly they are the principal beneficiaries of a distinctively brutal Russian form of crony capitalism, but much of this wealth ends up in the West, not in Russia itself.

There can be no more telling indication of the confidence such people have in the system or of the attractiveness of life in Russia that an estimated $700 billion has been shifted offshore since the 1990s. But it is not just the desire to seek a safe heaven for the vast wealth they have accumulated in the Russian version of privatization that motivates the oligarchs: the cautionary tale of Mikhail Khordorkovsky’s crime and punishment reminds us that great economic power is no guarantee of political immunity.

What is most noteworthy about Russia’s ruling class is that they frequently choose to live – and have their precious offspring educated – overseas. ‘Londongrad’ and its surrounding public schools are the venues of choice for the oligarchs that support Putin. Ironically, the freedom, security and even social values that are found in Britain have proved far more attractive than Russia’s, for those who can exercise choice, at least

There are, therefore, unused but potentially highly effective levers and sanctions that could be applied to Putin’s cronies that might cause them to think twice about supporting a regime that threatens their privileged access to the most agreeable aspects of life in the West. Not only could the City of London stop providing the sort of ‘financial services’ that are so vital to the controllers of often ill-gotten gains, but the prospect of having their children educated in, and confined to, Russia itself might prove a novel and hitherto unutilized form of domestic pressure.

Plainly this would cause some pain in the West, too. Compared to direct confrontation, however, it is an attractive and potentially effective option. There is – rightly – little appetite for direct military involvement in the Ukraine, especially on the EU’s part. For all the recent bluster from NATO, its capacities are limited even if it had the political will to use them. If Europe generally and Germany in particular were to wean themselves off of Russian energy this would radically alter inter-regional relations in Europe’s long-term favour.

While some see the EU’s declining military strength as an unambiguous sign of weakness, the decline in European bellicosity is one of its great virtues. In any event, there are other, more sophisticated, weapons in the European arsenal that can inflict real economic damage on Russia; they will eventually remind those in Putin’s sphere of influence just why closer links with the West looked so potentially attractive.

Skeptics will say that sanctions don’t work and moral superiority counts for little in the world of realpolitik. Perhaps. But many thought that about South Africa at the height of apartheid, too. There are ways of influencing the behaviour of states that go beyond the ultimately futile reliance on superior weapons systems – lessons we may need to learn closer to home, too.

China is no doubt studying Russia’s expansionist efforts closely. Similar sorts of economic sanctions may help to discourage this sort of adventurism in East Asia. It is equally noteworthy that so many wealthy Chinese are buying luxurious bolt holes in places like Sydney in case the political and natural environments at home become unbearable. A less accommodating attitude toward Russian and perhaps even Chinese plutocrats might encourage a bit more Western-style reform at home.

Mark Beeson does not work for, consult to, own shares in or receive funding from any company or organisation that would benefit from this article, and has no relevant affiliations. This article was originally published on The Conversation. Read the original article.

*Image of “action-promises compass” via Shutterstock