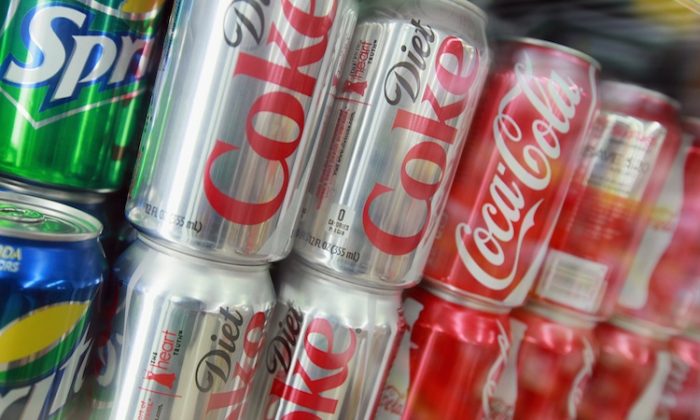 Cans of Sprite, Diet Coke and Coca-Cola are offered for sale at a grocery store on April 17, 2012 in Chicago, Illinois. The Coca-Cola Co. reported an 8 percent increase in net income for the first quarter of 2012 with global volume growth of 5%. (Scott Olson/Getty Images)
World

Coca-Cola sold in different parts of the world has vastly different levels of the potentially carcinogenic 4-methylimidizole, or 4-MI reports the Center for Science in the Public Interest (CSPI) in a study published June 26. CSPI, a Washington, D.C.-based consumer watchdog organization, reported Brazil had the highest levels of the compound, with nearly 66 times the amount found in Coca-Cola sold in California, or 50 percent more than in any other country tested.

The report by the advocacy group says the chemical, 4-methylimidizole, known as 4-MI or 4-MEI, was found in varying amounts in the drink sold in countries around the world. This potentially carcinogenic substance is formed in the industrial production of the caramel coloring used in the soft drink.

The amount of this substance found in Coca-Cola and Pepsi was first reported by CSPI in March, after which existing California law forced the soft drink makers to reduce the levels of 4-MI  to less than 30 micrograms per daily intake or label their drinks sold in the state with a warning about the risk of cancer. The report found that California Coke now has only 4-MI per 12 fl oz.

The chemical reaction between sugar and ammonia produces 4-MI, a substance shown to cause cancer in rodents.  Following CSPI’s March report, the Food and Drug Administration responded saying the group had overstated the health risk.

“A consumer would have to consume well over a thousand cans of soda a day to reach the doses administered in the studies that have shown links to cancer in rodents,” said FDA spokesman Doug Karas in a March statement.

At its U.S. website the Coca-Cola Company says, “Caramel color is derived from corn or cane sugar. It is made commercially by heating sugar and other carbohydrates under controlled conditions to achieve the desired color. Caramel color is approved by the FDA and is safe.”

Even so, CSPI has continued to push for further reduction of 4-MI in colas. “But now that we know it’s possible to almost totally eliminate this carcinogen from colas, there’s no excuse for Coca-Cola and other companies not to do so worldwide, and not just in California,” said CSPI executive director Michael F. Jacobson in the report.