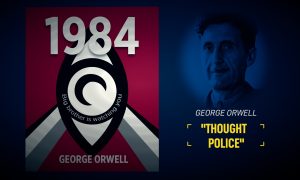 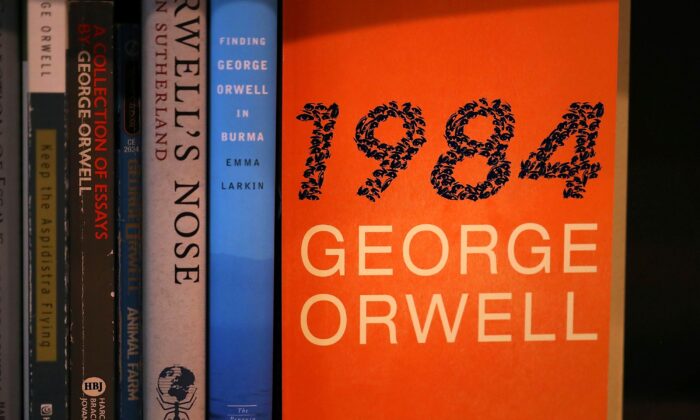 A copy of George Orwell's “1984” at a bookstore in a file photo. To prevent cheating while writing an exam, students studying at home due to the pandemic are forced to install software on their computers that monitors every keystroke they make, bringing to mind Orwell’s dystopian novel. (Justin Sullivan/Getty Images)
Viewpoints

You might remember reading these words in high school or university:

“The telescreen received and transmitted simultaneously. Any sound that Winston made, above the level of a very low whisper, would be picked up by it; moreover, so long as he remained within the field of vision which the metal plaque commanded, he could be seen as well as heard.”

This ominous description appears near the beginning of George Orwell’s dystopian novel, “1984.” Telescreens were used by the government to monitor citizens in their homes. Everything they did was recorded and citizens of Oceania knew that Big Brother was always watching them.

No doubt Orwell thought he was writing fiction. In reality, he was predicting the future, and he did a good job of that.

This is certainly the situation many university students find themselves in today. Due to public health restrictions, many courses have moved entirely online. Even exams are written at home, and, frankly, this is where the invasion of privacy takes place.

To prevent cheating, students are forced to install “anti-cheating” software on their computers. This software takes over the computer and monitors every keystroke a student makes while writing an exam. It also turns the webcam on and records every facial expression and every sound made by the student. Every movement is under the watchful eyes and ears of the monitor.

The software then uses an advanced set of video analytics to flag all suspicious activities. Things that will get a student flagged include looking away from the screen, blinking too often, reading the questions out loud, or moving away from the computer. Clearly, it doesn’t take much for a student to be accused of cheating.

However, the invasion of privacy doesn’t stop there. Before starting the test, students must record their entire environment. This includes taking pictures of their desk, the space under the desk, and of the surrounding area. Often, students have to set up a mirror behind them to prove that they aren’t hiding notes on their screen.

The problem with this dehumanizing approach to testing is that it treats every student as a potential cheater, just like Orwell’s fictional government of Oceania treated every citizen as a potential rebel. There’s no faster way to breed mistrust than to monitor a person’s movements—every movement—for suspicious activity.

It comes as little surprise that student unions across North American universities have raised serious concerns about the increased use of anti-cheating software. Not only are they worried about students being falsely accused of cheating, the unions aren’t convinced that the information being gathered won’t be used inappropriately in the future.

Given the unfortunate reality of data breaches in even the most tech-savvy companies, students are right to be concerned about their privacy.

Even if students are fortunate enough to avoid being flagged as cheaters, this software still places an unreasonable burden on them. Writing an exam while your every eye movement is being monitored is considerably more stressful than writing an exam in a regular classroom. Students want to focus on the test itself, not on ensuring that their eyes never stray from the computer screen.

Fortunately, universities have better options. Many professors have temporarily changed their exams to an open-book format with more long-answer questions in which students must synthesize arguments and evidence. These exams test the students’ ability to analyze, synthesize, and evaluate the subject matter as opposed to simply regurgitating material from the lectures.

In situations where traditional exams are essential, universities should be creative with their exam scheduling so that students can write the exams in large rooms with appropriate spacing. They should also have the option of arranging for someone, like a teacher or a minister, in their local community to serve as an exam proctor.

Another option would be to have a real person monitor students through their webcams rather than relying on anti-cheating software. While this would still be intrusive, a human would at least be able to use common sense before flagging innocent students for cheating just because they blinked their eyes too many times.

Of course, someone might object that each of these options is less efficient and more costly than installing anti-cheating software. That may be true. But it is important to treat students as trustworthy human beings rather than robots as they were in “1984.”

Supporting freedom isn’t always efficient, but it is always the best choice. No doubt George Orwell would have agreed.