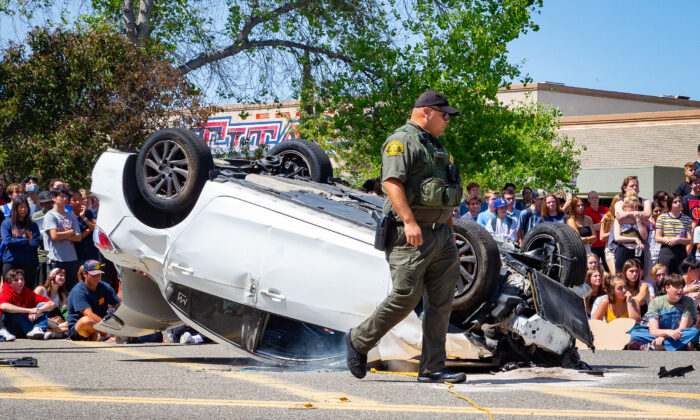 LAS FLORES, Calif.—First responder agencies constructed a crash scene April 24 involving two damaged cars, student actors, and concerned parents in what would be the 31st year of creating a multi-casualty simulation to educate students about the perils of drunk driving.

“So we’re going to move her body up on the hood of the car,” Orange County Fire Authority (OCFA) Cpt. and paramedic Steve Concialdi said over a high school student acting as a car crash casualty.

“A tarp will go over the vehicles until the students arrive for the presentation.”

Concialdi is the founder of Friends Against Drinking and Driving, a nonprofit which has been conducting mock DUI crashes in Orange County for 30 years.

At the crash scene, one overturned car with the bodies of bloodied student actors lay adjacent to a vehicle with a student lying through a broken windshield, lifeless on the hood of the vehicle.

“Why did you just not let her drive!” a female student wearing a prom dress shouted at a male student actor wearing formal attire while portraying a drunk driver.

“I cannot believe this is happening!”

An empty box of beer sat atop of their vehicle, while surrounded by hundreds of students watching the scene in front of Tesoro High School.

After eliminating smoke from the vehicles, fire personnel loaded the bodies of the mock crash victims onto stretchers, while police officers simulated a field sobriety test, eventually, arresting the student portraying the drunk driver.

Several students watching the crash simulation had tears in their eyes when the mother of one of the mock victims shouted for their child, apparently dead on the ground.

“I thought the mock DUI crash today was very impactful,” Concialdi told The Epoch Times. “I saw many students with tears in their eyes when the program was going on and when the two obituaries were being read.”