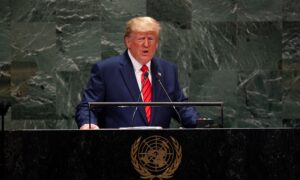 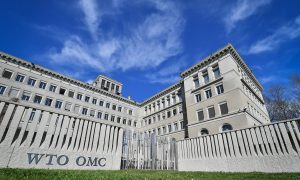 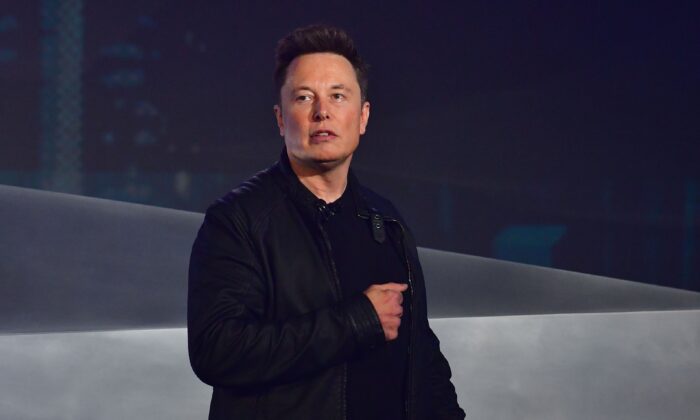 Tesla co-founder and CEO Elon Musk speaks during the unveiling of the all-electric battery-powered Tesla's Cybertruck at the Tesla Design Center in Hawthorne, Calif., on Nov. 21, 2019. (Frederic J. Brown/AFP via Getty Images)
Companies

The California-based electric vehicle and clean energy company filed its lawsuit Monday in the U.S. Court of International Trade, arguing that the Trump administration’s tariffs on the goods are unlawful. It seeks a cancellation and refund of the duties it has already paid, with interest, Bloomberg first reported.

The tariffs were “arbitrary, capricious, and an abuse of discretion,” Tesla’s filing said. U.S. Customs and Border Protection Commissioner Mark Morgan is also named as a defendant in the suit.

It comes after Lighthizer’s office in 2019 blocked Tesla’s request for relief  from duties of 25 percent on the company’s Model 3 electric car computer and screen. U.S. trade officials said at the time that the items use technologies that are of strategic importance to Beijing’s national security programs.

Tesla  said it would suffer economically due to the higher costs imposed by the tariffs.

“Increased tariffs on this particular part cause economic harm to Tesla, through the increase of costs and impact to profitability,” the company wrote in its request for relief last year. “Due to the complexity of the Model 3 Car Computer and the demanding timelines necessary for Tesla’s exponential growth, Tesla is unable to find another manufacturer to meet our requirements.”

Some $200 billion worth of goods, known as list 3, are currently being hit by a 25 percent duty, while another group of Chinese-made goods worth $120 billion, known as 4A, are subject to a 7.5 percent duty.

List 3 went into effect 2 years ago, while list 4A was hit by the tariff last year. The goods range from electric goods to raw materials.

The company in its lawsuit argues that both sets of items should be declared void, but did not specify which duties it was challenging, or how much it has paid so far, reported Fox Business.

The Epoch Times has contacted Tesla and Lighthizer for comment on the suit.

Lighthizer’s “imposition of List 3 and List 4 duties was arbitrary and capricious because USTR did not provide meaningful opportunity to comment, failed to consider relevant factors when making its decision, and failed to draw a rational connection between the facts found and the choices made,” attorneys for Tesla argued in the lawsuit Wednesday.