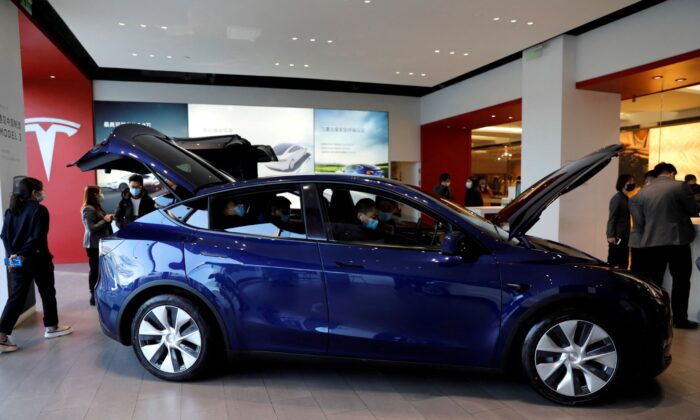 Tesla posted record deliveries for the fourth quarter, selling 308,000 cars and surpassing Wall Street estimates as critical vertical integrations and robust supplier relations enabled the automaker to ride out chip shortages that are plaguing most other manufacturers.

Analysts’ expectations capped the number of vehicles at 897,000 last year and 267,000 in the fourth quarter, according to a survey done by FactSet.

Tesla’s performance is crucially dependent on its sales in China, with half of the cars likely made in the nation, according to the WSJ. The Chinese regime modified local laws to allow foreign auto companies to have sole ownership and entice Musk to set up shop in the mainland.

Sales from China helped pull the company toward profitability in 2020, and accounted for a major portion of the company’s revenue in 2021. Chinese authorities currently are on a path to curb the influence of Big Tech, invoking several crackdowns against corporations like Alibaba, Didi Global, and Tencent.

According to the latest requirements by the regime, companies in China must retain local customer data within the country and obtain approval from authorities regarding auto software updates.

Unlike the United States, where Musk is seen as provocative and non-compliant, he has been rather genial to the Chinese way of doing business. When the Chinese Communist Party celebrated its centenary on July 1, Musk wrote in a congratulatory tweet, “The economic prosperity that China has achieved is truly amazing, especially in infrastructure!”

Tesla’s production facility in Shanghai is the main export hub for the company and helped launch Model Y in Europe, while making more vehicles than its plant in Fremont, California.

Tesla leaned on its tech capabilities and rewrote the vehicle’s software in order to integrate alternate chips, which enabled the manufacturer to keep production lines moving fast when compared to other manufacturers, who halted production and reduced deliveries because of supply chain issues.

The electric vehicle trailblazer also took advantage of its vertical integrations and strong supplier relations to put out cars on a timely basis.

“They have beaten all the odds,” Gene Munster, partner at Loup Ventures, said on Sunday, to Reuters. “The first is the demand for their products is through the roof. And the second is they’re doing a great job of meeting that demand.”

Tesla had hit over $1 trillion in market capitalization last year but a series of tweets and stock sales by Musk had dented the valuation. However, the company has pulled back up and is presently valued at about $1.06 trillion and is expected to deliver more than a million cars in 2022.