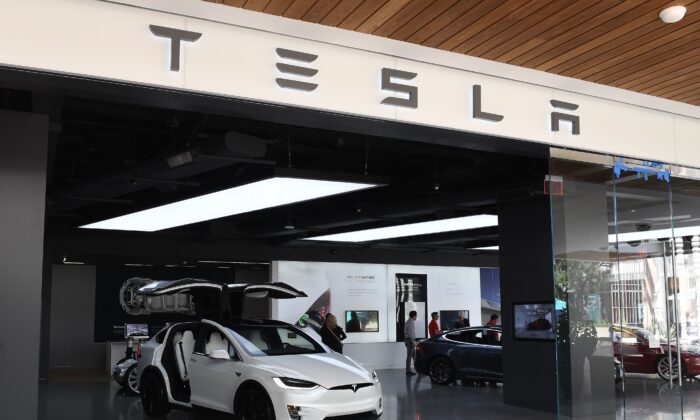 People stand in a Tesla showroom at a shopping mall in La.,, on April 25, 2019. (Mark Ralston/AFP via Getty Images)
Companies

Tesla has issued a recall of 817,143 vehicles over a defect that causes seatbelt chimes to go silent under particular circumstances.

“The audible chime may not activate when the vehicle starts and the driver has not buckled their seat belt,” the National Highway Traffic Safety Administration (NHTSA) said in their recall report (pdf).

The recall will remotely update the vehicle software this month to ensure that the chimes reliably commence as intended, sparing users the inconvenience of having to take their vehicles in for service.

This defect only occurs in a select few circumstances. It appears to happen when the driver has previously interrupted the chimes. Even in these conditions, the chimes will initiate again once the car is moving faster than 22 kilometers per hour (about 13.7 miles per hour).

Federal law requires all cars to initiate an audible chime when the car is started, which terminates when the seatbelt has been buckled.

In the recall documents, the company said it was not aware of any crashes or injuries due to the problem, and that the driver still receives a visual seat belt reminder.

This recall is one of several in recent months, as Tesla has increasingly come under the scrutiny of regulators for malfunctions in their vehicles’ safety systems. Just last week, the company recalled 54,000 vehicles for issues with the experimental “full self-driving” software, which has allowed vehicles to roll through stop signs without coming to a complete stop, much to the chagrin of regulators.

Tesla responded to the concern by disabling the full self-driving feature, and it intends to implement a similar software update to restore the feature sans “rolling stop” capabilities.

Additionally, the NHTSA has recently considered launching a probe to investigate the issue of “phantom braking” in Tesla vehicles. Tesla’s cars are equipped with a safety feature that automatically brakes when it detects hazards. However, users have recently begun complaining of spontaneous braking with no apparent hazard, causing potential danger.

Coming hot on the heels of the rolling stop recall, the new seatbelt chime recall is just the latest of Tesla’s safety issues. While the seatbelt chime malfunction is one of the less hazardous defects which can afflict a car, it will nonetheless become another hassle for the much-hyped electric car startup.