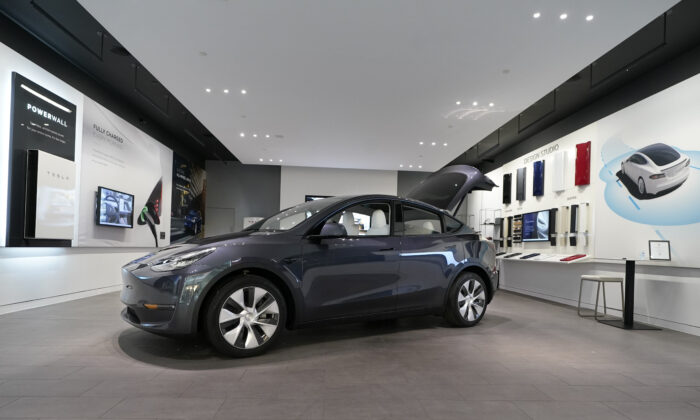 Several Tesla owners in the Prairie provinces are reporting issues with the electric vehicles’ heating system as the region has been experiencing extremely cold weather in recent weeks.

This is possibly caused by a software issue following the company’s latest software update for its Model Y and Model 3 vehicles in December.

Tyler Selvig, a resident of Saskatoon, said the heating system in his new 2022 Model Y Tesla—which he bought in November 2021—stopped working when he drove home from Regina after the Christmas holidays on Dec. 29.

“About half hour south of Chamberlain—45 minutes into the trip—our heat stopped working and there was a warning on the screen saying it needed service. We pulled over and called Tesla service and were told this was a very common problem,” Selvig told The Epoch Times.

He was advised to reset the vehicle computer and leave the HVAC (heating, ventilation, and air conditioning) system on, which did not work, and he had to drive to an auto repair outlet with zero heat in the cabin, he said.

Selvig said his father-in-law was following behind with his truck, so they were able to put his son and daughter—both under 3 years old—into the truck to stay warm. He posted about the incident on Twitter on Dec. 29.

@elonmusk @Tesla
Our Model Y could have killed my family today when the heat stopped working in -40c Called service and the reset and auto didn’t fix. Hour away from any service. Luckily we had family in an ICE vehicle that I could put my 2 kids under 3yrs old in quickly.

Selvig said the Tesla’s heating system revived after it was connected to a supercharger, but later failed again when he got back onto the highway. He was told that it was possibly caused by some software issues, as well as a faulty part in the octovalve—an advanced valve that regulates the thermal heating and cooling of multiple components in the Tesla Model Y.

“When the heater failed, we were wanting to return the car in frustration,” he said. “It was such a fun vehicle, and probably the most fun I’ve had driving in a long time, but having a vehicle that you can trust to take on a journey in the winter with your family is more important to me.”

Selvig said he felt disappointed when trying to schedule a service through the Tesla app, which said the earliest date available was Jan. 16. Meanwhile, a Tesla service outlet in Saskatoon gave him a first-generation Model X as a loaner car, which he said has a mileage of 100,000 kilometres and “tires [that] are too slippery to drive on our roads right now.”

“I have a pre-order for the [Tesla] Cybertruck, but after this trip we will be buying something else for sure,” he said. “The reliability of an ICE [internal combustion engine] vehicle in our climate is so much safer than an [electric vehicle].”

The Epoch Times reached out to the Tesla Corporation for comment, but did not hear back.

Selvig was not the only Tesla owner in the Prairies to report a heating system failure in the cold winter.

Another Tesla owner in Saskatchewan also complained on social media about a similar issue with his Model Y heating system on Dec. 27.

Well @elonmusk having some buyers remorse. Last Feb had our Model Y in the SC for a month with no heat. New Super-manifold and thought it was fixed. New set of sensors last week and now this. -30c in #Saskatchewan and a very cold 1 hr drive later we barely made the supercharger pic.twitter.com/JLJ7Pmzc0P

Selvig said he has been contacted “by many other [Tesla] owners with the same issues and they want it fixed asap.”

In an email from the Tesla Mobile Service, the automaker said it’s now working on a solution to the failure of the heat pumps, though it did not provide a clear timeline as to when it will be completed, Drive Tesla reported.

In the meantime, Tesla offered some suggestions to mitigate the issue by preconditioning the vehicle 30 to 60 minutes prior to departure, and using the recirculating air mode and auto mode, according to Drive Tesla. The issue may still occur when the temperature drops to -15 Celsius degrees and lower, however.