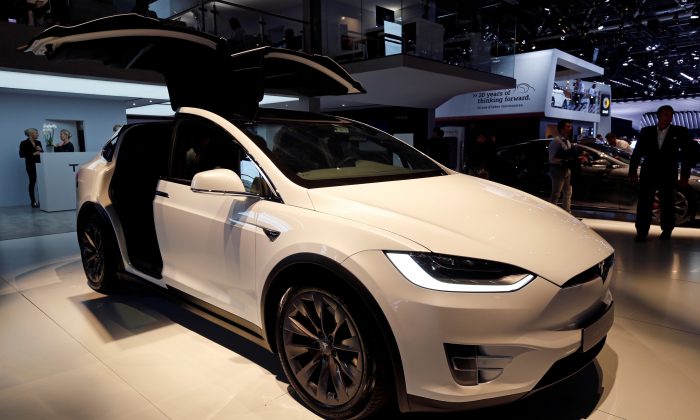 The Tesla Model X on the second press day of the Paris auto show, in Paris on Oct. 3, 2018. (Regis Duvignau/Reuters)
By Katabella Roberts

The man who died in March 2018 after his Tesla crashed into a highway barrier while in autopilot had previously complained about the system aiming him towards the same barrier, according to a slew of new documents published by the National Transportation Safety Board (NTSB).

Apple engineer Walter Huang was commuting to work in his Tesla Model X on March 23, using the autopilot assistance feature.  The vehicle veered off course and crashed into a damaged crash attenuator at the off-ramp for Highway 85 from 101 in Silicon Valley, California.

The impact of the crash rotated the Tesla counterclockwise, causing the front part of the vehicle to separate before it hit two other vehicles, a 2010 Mazda 3 and a 2017 Audi A4.

Huang was critically injured in the crash and later died in hospital, prompting an investigation by the NTSB, which is set to deliver its conclusion on Feb. 25.

According to the documents, Huang’s family noted that he had experienced issues with the autopilot steering system at the location of the collision on previous occasions and had even attempted to show them how the vehicle steered left when they passed the same location.

“Many times, when the driver went past the crash location in the left lane, the Tesla would steer left toward the gore point area, and he would have to manually take control to stay within the left lane,” the NTSB documents stated.

“The family explained that it happened so often that he had told both his brother and his wife about the problem,” it added.

Sometime before the crash, Huang brought the Tesla to the service center in Sunnyvale for an issue with the rear Falcon style doors and advised the service technician of the problem with steering into the gore area.

The report said that Huang’s Apple iPhone 8 Plus showed that a game called “Three Kingdoms” had been active on his mobile during his drive to work. The game is a world-building strategy game with multi-player capability. When playing the game on a mobile device such as an iPhone 8 Plus, most players have both hands on the phone to
support the device and manipulate game actions.

Meanwhile, Tesla noted in the NTSB report that the autopilot feature was “designed for your driving comfort and convenience and is not a collision warning or avoidance system.” The company states that their user manual explains it is the “responsibility of the driver to stay alert, drive safely, and be in control of the vehicle at all times.”

“Never depend on Traffic-Aware Cruise Control (TACC) to adequately slow down Model X. Always watch the road in front of you and be prepared to take corrective action at all times. Failure to do so can result in serious injury or death.”

The Huang family is suing Tesla for wrongful death and the California Department of Transportation for allegedly failing to properly maintain the section of Highway 101 where the crash took place.

Earlier this month, Tesla was forced to recall 15,000 Model X SUVs in North America because of a potential issue that can lead to a loss of power steering assist, making steering harder and increasing the risk of a crash.

The electric vehicle giant said it had found vulnerabilities in aluminum bolts, which could break and cause a complete power steering failure, particularly in areas with cold climates that used road salts.

While no known crashes or injuries associated with the Model X recall, Tesla decided to call back the 2016 models and offer to fix the fault.