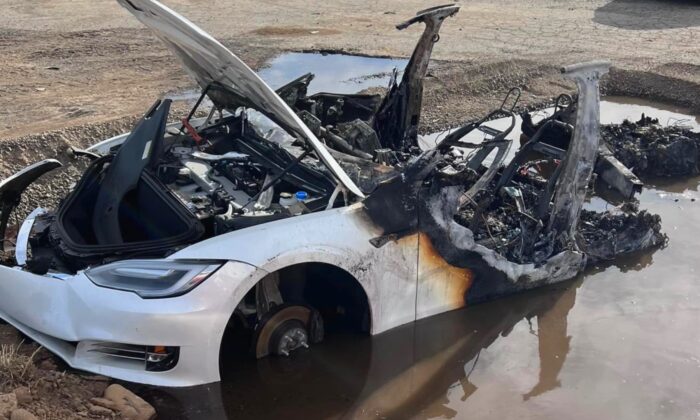 The Tesla Model S that spontaneously burst into flames at a wrecking yard in California. (Courtesy of Sacramento Metropolitan Fire Department)
Northern California

A Tesla Model S spontaneously burst into flames at a California junkyard earlier this month and fire crews used thousands of gallons of water to put out the blaze, the Sacramento Metropolitan Fire District said.

In a statement on Facebook, the fire department shared a video and pictures of the electric vehicle that was involved in a major accident more than a month ago and was set to be dismantled at the wrecking yard.

“The vehicle was fully involved with fire on arrival and took a significant amount of time, water, and thinking outside the box to extinguish,” fire officials said. “Crews knocked the fire down, but the car kept re-igniting and off-gassing in the battery compartment.”

Battery-powered vehicles are known to be notoriously difficult to deal with when they catch fire. While electric vehicles catch fire less frequently than gas-powered cars, the use of lithium-ion batteries means the fires can burn for longer and be more intense.

The fire department worked together with on-site wrecking yard personnel to turn the Tesla on its side in order to gain access to the battery compartment underneath, but the car would still re-ignite from the residual heat.

In the end, responders dug a small pit and filled it with water, effectively submerging the vehicle’s battery compartment.

“The pit ultimately reduced the total amount of water needed, estimated at 4,500 gallons, and limited the runoff of contaminated water,” officials said. “The vehicle was fully extinguished, and no injuries were reported.”

It is rare for an electric vehicle to catch fire spontaneously while parked and most fires come after a car accident, though there have been disturbing experiences reported from owners of battery-powered vehicles whose cars suddenly burst into flames, even while charging.

Last month, a Vancouver-area driver said he had to kick the window of his almost brand-new Tesla Model Y to escape a dangerous vehicle fire after the car lost power and trapped him inside.

Jamil Jutha was driving toward Mountain Highway in North Vancouver, Canada, on May 20 when the Model Y that he bought about eight months ago suddenly shut down, Vancouver-based CTV News reported.

As the cabin of the car started to fill with toxic smoke, Jutha said he wasn’t able to open the doors of the vehicle and began to panic. In order to escape, the man decided to break his way out of the car by kicking out the driver-side window.

If a Tesla’s power shuts down, there is a manual release to open the doors from the inside by lifting a mechanical release handle near the window switches.

“There is a manual release, but in the heat of the incident, that wasn’t intuitive to him and he kicked the window out and was able to escape and within a couple of minutes the vehicle did become fully engulfed in fire,” Brian Hutchinson, the chief firefighter of the District of North Vancouver Fire and Rescue Services, told the Daily Hive Vancouver news portal.

Hutchinson noted that Jutha is very fortunate to have “the wherewithal and the strength” to break the window out, adding that investigators took control of the vehicle to determine the cause of the blaze.