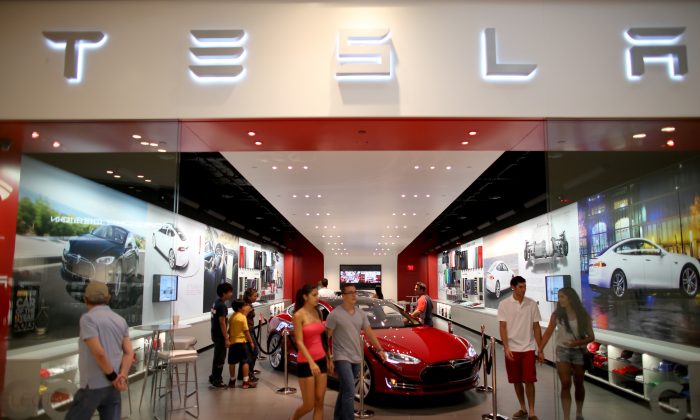 A Tesla dealership in the Dadeland Mall in Miami on June 6, 2013. (Joe Raedle/Getty Images)
Companies

The promise of an electric and autonomous driving future was one investors steadfastly believed in. Tesla’s stock soared almost 46 percent on the Nasdaq stock exchange during 2017.

But sooner or later, a company must deliver on its promises to justify the high value its investors assign to it. Over the last few weeks, Tesla experienced a spate of fresh setbacks that are shaking investor confidence in whether CEO Elon Musk can deliver on his bold promise of bringing electric cars to the masses.

Tesla’s troubles are manifold. A fatal Model X crash in California on March 23 has raised new questions around the efficacy of Tesla’s autopilot feature. The company confirmed autopilot was enabled at the time of the crash, and Tesla is cooperating with federal authorities on the investigation.

A week later, on March 30, while the automotive industry was focusing on the New York International Auto Show, Tesla issued a massive recall of 123,000 Model S sedans over what the company called “excessive corrosion in the power steering bolts.” It is the biggest recall ever issued by the Palo Alto, Calif.-based company and involves around half of all Model S vehicles sold to date, according to Ars Technica, a technology blog.

The bad publicity along with the company’s continued inability to meet production targets on the Model 3—Tesla’s mass-market electric sedan—has sunk its stock, which declined almost 12 percent during the week ending March 30. During the month of March, its stock has shed more than 22 percent.

More tellingly, Tesla’s bond prices have been dropping, which reflects increasing negative sentiment among professional investors regarding the outlook for the company. In many ways, this is more indicative of where Tesla’s fortunes are heading. Unlike its stock, Tesla’s bonds can only be bought by qualified institutional buyers, as the company is not registered with the SEC.

Moody’s, the major credit rating agency, on March 27 downgraded the credit rating on Tesla’s senior notes to Caa1, which is seven notches below “investment grade,” according to the agency’s ratings scale. It also changed its credit outlook to “negative.”

In a note, Moody’s analysts wrote its decision on Tesla was due to a “significant shortfall in the production rate of the company’s Model 3 electric vehicle.” Moody’s also said that Tesla is likely to raise additional capital in the near future to remain liquid.

Tesla’s business model is novel in that it cannot meet demand for its vehicles and is essentially funding its business using customer deposits and financing from capital markets.

A company so indebted needs customers, investors, and creditors to keep believing, and thus continue extending credit. Despite Tesla losing $2 billion in 2017, investors bought Musk’s story. On the company’s fourth-quarter earnings call in early 2018, Musk told analysts that Tesla may produce up to 100,000 all-electric semi-trucks per year in four years, and make 1 million vehicles per year by 2020.

But those are just projections—ones that the company has not been able to meet. The latest goal from the company is 2,500 Model 3 units per week by the end of the first quarter 2018, and 5,000 units per week by mid-year. But those are figures Tesla was supposed to hit by the end of last year, according to a statement tweeted by Musk on July 2, 2017.

On April 3, Tesla released first-quarter production numbers that again fell short of its stated goals, with 34,494 total vehicles. Of those, 9,766 were Model 3 cars, with 2,020 produced in the seven days leading up to the end of March alone. Those figures fell short of the goal by 20 percent.

Last fall, after delaying Model 3 production goals twice, Musk alarmed investors when he called the situation at the company’s battery gigafactory “production hell,” in an Oct. 26, 2017, tweet. Musk sent some of the company’s top engineers to Reno and noted that employees were working seven days a week to resolve the production issues.

This time, Tesla did all it could to catch up.

“Let’s make them regret ever betting against us. You will prove a bunch of haters wrong,” Tesla head of engineering Doug Field urged workers in a March 23 email, according to Bloomberg.

On April 2, Musk wrote in a tweet that he was “back to sleeping at the factory” to ensure production went smoothly, adding that “car biz is hell.”

Though Model 3 production fell short, Tesla should be able to obtain the new capital it needs.

Last year, Tesla’s free cash flow was around minus $3.5 billion, driven by capital expenditures of $3.4 billion. At the end of December, Tesla had $3.4 billion of cash on its balance sheet.

This year, the company expects expenditures to increase slightly, so the company needs to raise additional funds to cover its $660 million maturing convertible note due in June, plus anticipated capital expenditures for next year.

Tesla has a few options. It can raise additional equity, which will further depress its share price. It can also raise money via the debt markets. Interest rates will be substantial but could be mitigated if Tesla secures the debt with its valuable gigafactory or other assets.

In February, the company was able to sell $546 million of asset-backed securities sponsored by Model S and Model X lease payments, which were oversubscribed. Musk’s popularity and salesmanship, coupled with Tesla’s brand and promise, means Tesla will be able to raise financing regardless of recent negative news.

The question will be at what price, and what that will mean for its stock price.

Tesla’s short interest as of March 31 was 28.4 million shares, or around 22.5 percent of its stock float. Chances are, those short sellers may be onto something.