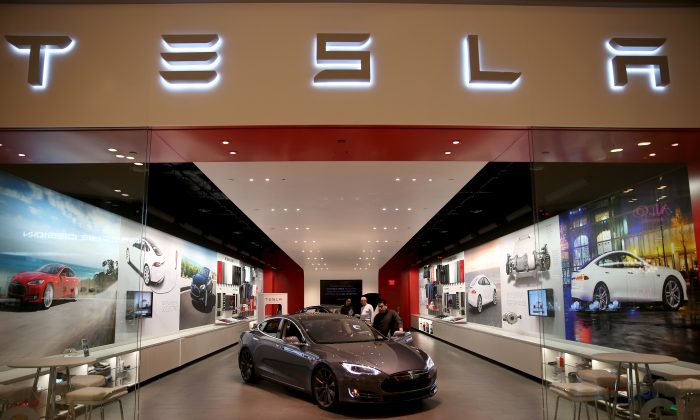 People look at a Tesla Motors vehicle on the showroom floor at the Dadeland Mall in Miami, FL., on Feb. 19, 2014. (Joe Raedle/Getty Images)
Tech

Earlier this month, Tesla unlocked self-driving features for Model S sedans in the 7.0 software update. The company warned its drivers that Autopilot was still in its beta phase and that drivers “must keep their hands on the steering wheel” at all times, but predictably many drivers have chosen to do the opposite, freeing their hands from the wheel to see how well the self-driving system would fare on its own.

The experiments uncovered a number of flaws in Autopilot, which Tesla drivers proceeded to report on its official forum—most notably, cars on Autopilot would repeatedly try to exit on any offramp, and they would often swerve toward the car in front, even if that car was driving in the opposite direction—with the consensus being that there was good reason the new self-driving settings were labeled beta.

“I had the steering shut down on me no less than 5 times today alone and that doesn’t include the multiple times I had to jump in to prevent a false turn or collision,” wrote one Model S owner on the forum. “I predict that within several weeks there will be a rash of reported accidents involving Teslas whose owners are using the steering system with insufficient care and monitoring.”

Still, the same poster admits that the update saw a marked improvement in the Traffic Aware Cruise Control feature, and that Autopilot was effective in “rush hour stop and go traffic.”

Some drivers and passengers posted theirs adventures with the new self-driving system on YouTube. In one video titled “Tesla Autopilot tried to kill me,” the car turns sharply left toward an approaching vehicle on a narrow two-lane mountain road. In another, the self-driving system does remarkably well on a packaged highway—the driver said that he felt much safer with Autopilot after seeing how well it worked for a few minutes in action—but still had to be steered when going down a curved lane.

The drivers appeared to have read the instructions. In the latter video, the upload states “YES, we KNEW the autopilot is for highway driving only” in the video description.

Tesla said that the self-driving system is “designed to keep getting better over time,” and CEO Elon Musk said in a phone conference that the company is getting continuous feedback from its vehicles—he calls it “fleet learning technology”—and that improvements will happen “day-to-day, noticeable week-by-week, even without software update[s].”

The 7.0 update highlights Tesla’s commitment to becoming the first company to make fully autonomous cars available to the consumer. The company boasts that its self-driving car is the only one to have the full suite of “camera, radar, ultrasonics, and GPS,” and in the most recent phone conference, Musk said that Tesla should have a fully autonomous car by 2018, two years ahead of the unofficial roll-out date set by Chris Urmson, Google’s self-driving car project lead.

Urmson said in September that he wants to have self-driving cars available soon enough so that his son, who turns 16 in 2020, would never have to get a driver’s license. In September 2014, Musk had a similar deadline, stating that he expects self-driving technology to be ready in 5–6 years.

Musk also took shots at Google’s self-driving technology in a recent phone conference, disparaging its LIDAR system, which builds a 3-D map of its surrounding with lasers.

“I’m not a big fan of LIDAR, I don’t think it makes sense in this context,” Musk said, according to Wired.