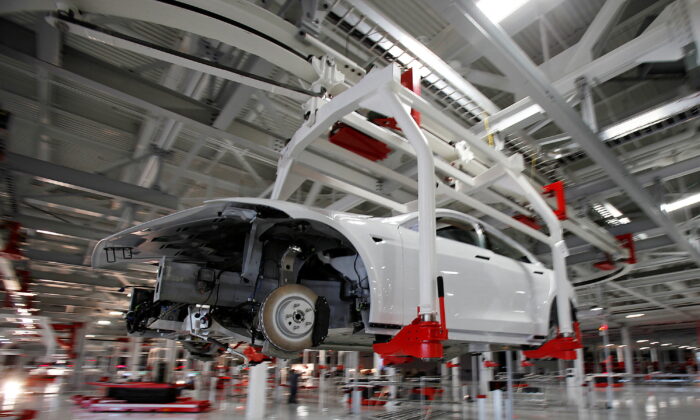 The body of a Tesla Model S is transported by an automated crane at the Tesla factory in Fremont, Calif., on Oct. 1, 2011. (Reuters/Stephen Lam/File Photo
Companies

Tesla, the world’s most valuable carmaker, filed a countersuit against the California Civil Rights Department (CRD) after the agency alleged that the company’s Fremont plant fostered racial bias.

In its February complaint, the CRD called the plant a “racially segregated’ workplace. The agency reported about a black worker at Fremont having heard racial slurs up to 50–100 times a day. The workers also spotted racist graffiti at workstations, restroom walls, lunch tables, and other areas of the plant. Racial slurs are said to have been thrown around in Spanish, including words like negrita and mayate.

The company argued in the lawsuit that the department adopted procedures for suing and investigating employers without seeking public comments—a decision that violated laws of the state.

On Jan. 3 Tesla was served with a one-page “Cause Finding” by the CRD. The page did not detail any evidence to justify the agency’s reason to sue, according to the firm.

On Feb. 9, the agency filed a civil complaint, with causes for action filed in March. These actions of the CRD violated California’s FEHA policy, Tesla insisted.

“The truth is that CRD did not engage in meaningful conciliation efforts or good faith mediation with Tesla, consistent with its underground regulation that no such pre-suit obligations apply to it under the FEHA,” the company said in the countersuit.

The Fremont factory accommodates more than 15,000 workers, and black workers are segregated to the lowest levels, the CRD complaint alleges.

Black workers make up 20 percent of factory operatives like engine and other machine assemblers, but only 3 percent of professionals, and there are no black executives, it says.

Black workers complained to the agency that they were assigned to more physically demanding roles, paid less, more often laid off than other workers, and given the lowest-level contract roles.

The Epoch Times has reached out to Tesla.

In the countersuit, Tesla dismissed such accusations, pointing out that the agency failed to name a single Tesla employee who experienced such racial harassment. Neither does the complaint provide a date, location, or factual context for any of the alleged harassment, it pointed out.

In August, Tesla had tried to get a judge to dismiss the agency’s lawsuit citing similar arguments. However, the state judge denied the request.