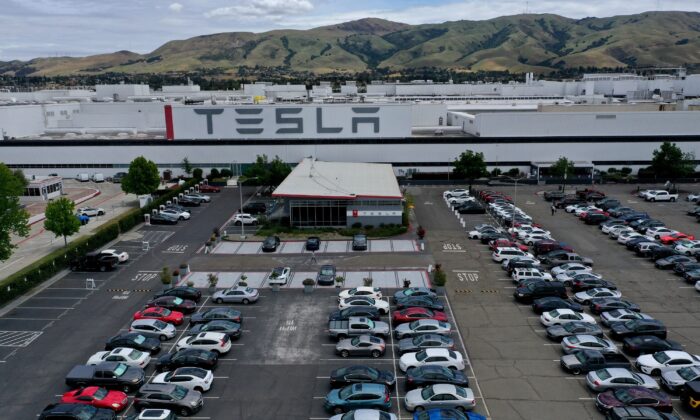 An aerial view of the Tesla Fremont Factory in Fremont, Calif., on May 13, 2020. (Justin Sullivan/Getty Images)
By Naveen Athrappully

Tesla plans to invest more than $3 billion in Nevada to expand its Gigafactory as well as establish two additional factories, with the investment projected to create thousands of jobs in the state, the company announced on Tuesday.

“We will be investing over $3.6 billion more to continue growing Gigafactory Nevada, adding 3,000 new team members and two new factories: a 100 GWh 4680 cell factory (with capacity to produce enough batteries for 1.5 million light-duty vehicles annually), as well as our first high-volume Semi factory,” Tesla said in a blog post in Jan. 24. Semi is Tesla’s fully electric combination truck that is claimed to have an energy consumption of less than 2 KWh per mile as well as a range of 500 miles.

“Whether it’s closing the lithium loop, unlocking innovation and investment in logistics, entertainment, science and technology, or embracing entrepreneurship, the message is that Nevada is ready to partner,” Lombardo said in an annual state of the state address on Monday.

While electric vehicle (EV) production is being promoted in the United States, the country faces a major challenge as rival China controls much of the materials underpinning the sector.

Lithium and cobalt are crucial in manufacturing EV batteries. Chinese chemical processors and refiners are estimated to be responsible for 82 percent of cobalt and 60 percent of lithium midstream production.

Since 2014, Tesla has invested $6.2 billion in Nevada to build its 5.4 million-square foot Gigafactory, with the construction process creating 17,000 local jobs. The company has directly hired more than 11,000 team members.

Tesla operates the Nevada plant together with the facility’s co-investor Panasonic, which is also a key cell supplier of the firm. The facility is primarily focused on supplying the company’s Fremont vehicle assembly plant in California with high-voltage battery packs.

The Tesla Gigafactory in Nevada is currently America’s largest battery production operation. Adding in the newly announced $3.6 billion investment, Tesla will have poured almost $10 billion into the facility since 2014.

Earlier this month, the company had reported that it had only delivered 405,278 vehicles in the fourth quarter, short of Wall Street’s expectations of delivering around 420,000–425,000 vehicles. Tesla is expected to address this issue during the earnings reveal.

Tesla’s competitors like Ford, Volkswagen, Toyota, General Motors, Hyundai, and others have also announced plans involving billions of dollars’ worth of investment in the United States to manufacture batteries and other materials related to electric vehicles.

In December 2022. for example, Hyundai announced a $4–5 billion investment in Georgia to build a battery manufacturing plant.

The United States also faces the challenge of poor infrastructure for EV adoption. For instance, California plans to make all new vehicles in the state sold by 2035 to be fully electric or plug-in hybrids.

However, the state power grid issued an alert in September asking citizens to avoid charging electric vehicles due to the rising demand for electricity.