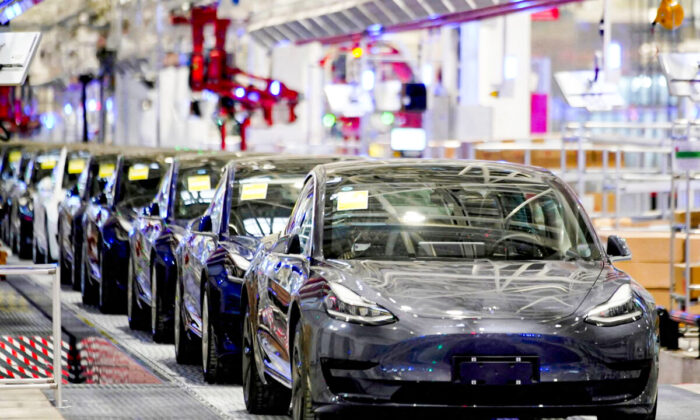 Tesla's China-made Model 3 vehicles are seen during a delivery event at its factory in Shanghai, China, on Jan. 7, 2020. (Aly Song/Reuters)
Thinking About China

Tesla and SpaceX Are Apparently Compromised by China

Elon Musk and his companies, Tesla and SpaceX, are under scrutiny for their billion-dollar links to China and their CEO’s political support for the totalitarian country. Some of that support comes in the same breath as his denigration of the United States.

While the freedom that America gives business is legendary in attracting capital and helps American soft power, Beijing does no such thing. Instead, it requires major political and technological concessions from companies that want access to the massive Chinese market. The political concessions can include opaque campaign donations that remove China’s top critics from elected positions in the United States.

This sets up a dynamic in which American politicians and businesses have little to lose when publicly snubbing Washington and everything to gain by embracing the Chinese Communist Party (CCP), including by looking the other way while technology transfers to Chinese companies that could eventually out-compete Americans on the price of labor and depth of China’s supply chains.

This is the China in which Tesla and SpaceX, both of which are supposed to be patriotic American companies, are operating today. Some of the technology that China seeks, which SpaceX possesses, is even classified.

The foreign suppliers upon which SpaceX relies, according to a March 20 Wall Street Journal article, could have ties to China, which would be a relatively easy way for Beijing to steal sensitive technologies that likely have major military and economic uses. Indeed, one of China’s new rockets looks suspiciously like the SpaceX Starship.

They note that U.S. lawmakers are concerned about Musk’s close links to China. They should be concerned. Musk and his two companies appear to be hiding something. They did not respond to the Journal’s requests for comment.

SpaceX could be partially owned by China, as was Tesla, last we heard. When China’s Tencent bought 5 percent of Tesla in 2017, Musk tweeted, “glad to have Tencent as an investor and advisor to Tesla.” In other words, a CCP-controlled company is advising Musk.

Tencent and the Chinese embassy refused to answer Journal questions. The White House failed to respond to a Journal question about security risks from Musk’s ties to Beijing.

What is everybody hiding with all this silence?

The CCP has a massive lever over Musk, which is its gatekeeper power over one of Tesla’s largest markets: China.

According to the Journal, this is “thanks in large part to support of China’s Communist Party and Mr. Xi. Chinese authorities gave Mr. Musk low-interest loans, cheap land, and other incentives for a Shanghai facility that opened in 2019 where Tesla vehicles and battery packs are assembled.”

When Tesla faced financial difficulties and manufacturing shortfalls in 2018 and 2019, Chinese banks provided two loans that included a $1.4 billion figure.

Musk’s pro-CCP signaling, and disdain for the spirit of American laws that support human rights, goes on and on. On the last day of 2021, Musk opened a showroom in Xinjiang, where there is an ongoing genocide against the Uyghurs. He did it weeks after President Joe Biden signed a bill into law against forced labor from the region. Musk snubbed human rights and the president—all of America with him.

Musk has played host to China’s ambassador in the United States, including inviting him to a Tesla factory in California. Musk fawned over China’s supposed economic prosperity, which is lackluster compared to countries like Japan, South Korea, and Taiwan.

He celebrated the CCP’s 100th anniversary by tweeting, the “economic prosperity that China has achieved is truly amazing, especially in infrastructure!”

In July 2020, Musk did what should be unthinkable for anyone claiming to be a freedom-loving American. He praised China while denigrating America.

“China rocks[,] in my opinion,” he said. “People there—there’s a lot of smart, hard[-]working people … whereas I see in the United States increasingly much more complacency and entitlement.”

Musk goes beyond what sounds like CCP propaganda, however, to ensure that America remains vulnerable to China’s technology theft through high-paid lobbyists.

In 2019, a staunch China critic and former Senator Cory Gardner (R-Colo.) attempted to require, through a provision in new legislation, that NASA consider whether space-launch companies, including SpaceX, have financial ties to companies from China, according to the Journal. While the Senate Commerce Committee agreed to the provision, SpaceX lobbyists successfully killed the bill.

Gardner lost his seat in the 2020 election to John Hickenlooper, who called China a “great nation” that does not seek global dominance. Hickenlooper raised over $5.6 million in the 2020 election cycle and has close ties to the Musk family. He flew in a Musk private jet, donated to a Musk charity, and officiated at the wedding of Musk’s brother, Kimbal. He was, as a consequence, investigated over ethics concerns.

American legislative processes are too vulnerable to corrupting influence from China-linked American CEOs, who have billions of dollars worth of business riding on, making it easy for China to import their technologies and ultimately destroy their companies and shareholder value.

Meanwhile, there is what should be considered a criminal silence from bought politicians who are supposed to protect the interests of voters rather than rake in money from lobbyists and unpatriotic campaign donors. There’s too much of this omertà, which runs from the White House to China’s embassy, and through businesses like Tesla and SpaceX.

Meanwhile, like former Senator Gardner, the good guys are finishing last and losing their seats.

Citizens in free societies have a right to know who owns their biggest corporations, who is donating to which political campaigns, and what technologies they are all bleeding to the enemies of democracy. Without more transparency, the CCP will continue to outpace America and destroy our freedoms.