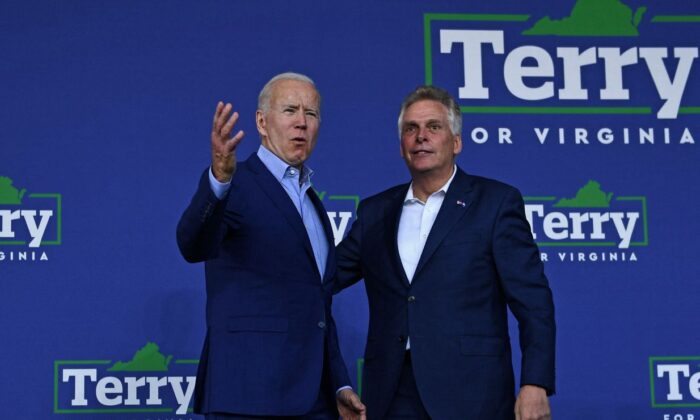 Terry McAuliffe, the Democrat candidate for the Virginia governor’s race, warned that President Joe Biden is “unpopular” in Virginia in off-the-cuff remarks during a video conference.

“We’ve got to get Democrats out to vote,” McAuliffe, the former governor of the state, said in the Tuesday night virtual event with Virginia Democrats. “We are facing a lot of headwinds from Washington, as you know. The president is unpopular here in Virginia, so we have got to plow through,” McAuliffe said, referring to Biden.

Virginia’s off-year elections are viewed as a bellwether contest for the party that controls the presidency and could serve as a preview of the 2022 midterms.

A spokesperson for the McAuliffe campaign said on Wednesday in a statement to news outlets that the candidate’s “point was clearly that Democrats can’t take anything for granted and must turn out to vote this year: Glenn Youngkin is running on a divisive, Trumpian agenda that puts election conspiracy theories and banning abortion first.” Youngkin is the Republican nominee for governor.

McAuliffe’s campaign hasn’t yet responded to a request for comment.

During debates and public events, McAuliffe has frequently attempted to distance himself from the agenda pushed by Democrats in Congress and the Biden administration. At one point during his debate with Youngkin, McAuliffe—who has been longtime friends with Biden—called the $3.5 trillion reconciliation package too expensive.

Nonetheless, Vice President Kamala Harris recently reportedly headlined a fundraiser for McAuliffe, while her husband, second gentleman Doug Emhoff, campaigned for him in Loudoun County over the previous weekend. Biden attended an event for McAuliffe in late July.

Election analysts at the Cook Political Report have noted that the race between McAuliffe and Youngkin is a toss-up, which could be a problem for Democrats in the state moving forward. Republicans haven’t won a statewide election in Virginia in more than a decade.

Outside of Virginia, some Democrat analysts have sounded the alarm for the 2022 midterms, which are just over a year from now.

Rep. Tom Malinowski (D-N.J.), who represents a swing district, told other members of his party that Democrats could lose their House majority next year and pressed fellow Democrats to pass the $1.2 trillion infrastructure bill.

“All that stuff is real,” the New Jersey Democrat said, referring to some polls showing dropping approval ratings for Biden and Democrats. “If the election were held right now, I don’t think we would win,” he contended.

Before that, Douglas Schoen, who had worked for former President Bill Clinton and was an adviser to Michael Bloomberg’s short-lived presidential campaign, issued a warning about the upcoming 2022 contests. Generally, the party of the president loses at least one house of Congress during the midterms.

“The marked decline in support for President [Joe] Biden and his administration nationally and in key swing states indicates that the Democratic Party could endure a blowout defeat in the 2022 midterm elections,” he wrote for The Hill in an opinion piece last month.