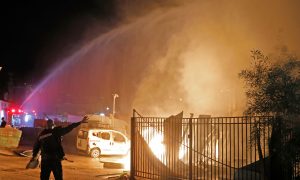 The IDF posted a Twitter post, accompanied by a video, saying: “We have just started carrying out an aerial strike of Hamas and Palestinian Islamic Jihad targets across Gaza. If you want to know why, take a look at what it feels like to be an Israeli living in southern Israel today and you’ll understand:”

We have just started carrying out an aerial strike of Hamas and Palestinian Islamic Jihad targets across Gaza.

If you want to know why, take a look at what it feels like to be an Israeli living in southern Israel today and you'll understand: pic.twitter.com/HpboJpaNkn

Men, women, and children are running into bomb shelters as more rockets are launched from #Gaza into Israel.

Our tanks continue to strike Hamas targets in Gaza.

We will defend Israel. pic.twitter.com/2Es0NGSDUe

The IDF said in posts to Twitter that more than 90 rockets have been fired from Gaza at southern Israel, and that its Iron Dome Aerial Defense System had intercepted “dozens of them.”

We have just started targeting Hamas military posts in Gaza in response to over 90 rockets fired from #Gaza at Israeli civilians this morning.

More than 50 rockets have been fired at Israeli civilians over the last half an hour.

The Iron Dome Aerial Defense System has intercepted dozens of them.

According to the Jerusalem Post, residents in the cities of Ashkelon and Ashdod reported hearing explosions in the area. The IDF also posted footage that appear to show the incoming missiles.

The Police Spokesperson’s Unit released a statement telling Israeli residents not to approach any remains of rockets, and instead report it to the Bomb Dispersal Unit to handle them, the Jerusalem Post reported.

Rocket found on the street near Ashkelon beach. No injuries reported.#IsraelUnderFire#Israel #Gaza pic.twitter.com/FuUaJcIv7b

“The resistance will continue to respond to the crimes by the occupation and it will not allow it to shed the blood of our people,” the Hamas terrorist group’s spokesman Abdel-Latif al-Qanoua said in a statement on May 4. He made no explicit claim for Hamas firing the rockets.

Reuters reported that one of the attacks was claimed by the Palestinian Democratic Front for the Liberation of Palestine (DFLP), which said it fired rockets at the Israeli city of Ashkelon.

The flare-up comes days before Muslims begin the month of Ramadan and Israelis celebrate Independence Day.

A 15-year-old was lightly injured when he tried to seek shelter in the Israeli city of Sderot, according to Israel’s national emergency service, Magen David Adom (MDA). Two other civilians were treated for shock, an MDA spokesperson said, according to the Jerusalem Post.

Israel hit back with air strikes and tank fire, Reuters reported. The strike killed one 22-year-old Palestinian man, the Gaza Health Ministry said. It was not immediately clear if he was a terrorist or civilian.

Reuters also reported that Gaza health officials said four Palestinian bystanders were wounded in one of the Israeli strikes.

The Israeli military said that its air and tank strikes targeted rockets launchers and Hamas posts. Meanwhile, the Palestinian Education Ministry said it was evacuating schools in areas targeted by Israel, Reuters reported.

Israeli Prime Minister Benjamin Netanyahu will hold a security meeting with the IDF chief of staff, the head of intelligence and head of Shin Bet on May 4 to discuss the situation, the Jerusalem post reported.

The May 4 attack to Israel from Gaza comes a day after two Israeli soldiers were shot and injured by gunfire from Gaza, while they were patrolling the Gaza border. In response, the Israeli Air Force bombed a Hamas target on May 3, which killed two Palestinian terrorists.

The Israeli military said some 5,200 Palestinians had amassed along the frontier on May 3, according to Reuters.

The terrorist group Hamas said in a statement on May 2 that its Gaza chief, Yeyha Al-Sinwar, had traveled to Cairo for talks on efforts to maintain calm along the border and alleviate hardship in the area.

Some two million Palestinians live in Gaza, whose economy has suffered years of blockades as well as recent foreign aid cuts. Unemployment stands at 52 percent, according to the World Bank, and poverty is rampant.

Israel says its blockade is necessary to stop weapons reaching the terrorist Hamas group, which has fought three wars with Israel in the past decade.

With reporting from Reuters