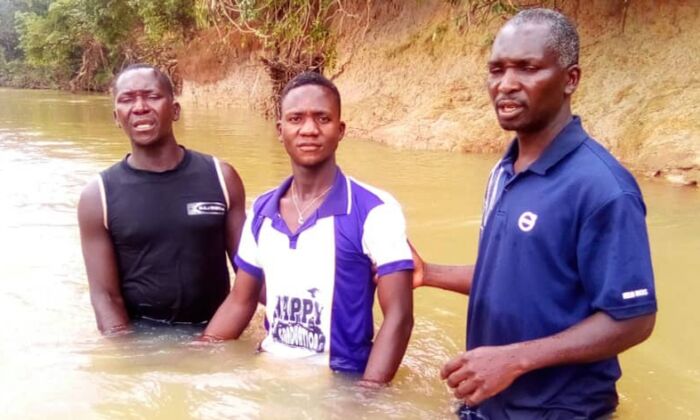 Terrorists Kidnap Hundreds of Nigerian Women, Use Them as Sex Slaves

NIGERIA—Hundreds of women are being kidnapped every week and held as sex slaves by bandit terrorists in Nigeria’s north, according to a national politician.

Meanwhile, the government is unconcerned about the crimes, Umar Barde, a member of the Nigerian House of Representatives, told The Epoch Times.

“They [terrorists] rape both young and old women, even teenagers,” said Barde, who represents Kajuru and Chikun counties of Kaduna state.

Large bandit gangs who identify primarily as members of the Fulani tribe have waged endless war on farming communities in northwest and north-central Nigeria since 2011, according to reports.

The Fulani, a large ethnic group in West Africa that claims more than 20 million members in Nigeria, has been blamed for thousands of “genocidal massacres” in the country in recent years—according to Greg Stanton, founding president of Genocide Watch.

“They target members of a religious group,” Stanton wrote in a recent report.

He rejects claims by U.S. officials, including the ambassador to Nigeria, Mary Beth Leonard, that the massacres are traditional herder-farmer “conflicts.”

In a June 29 attack in the frequently terrorized Niger state, the terrorists killed more than 30 soldiers and policemen at a mining site in the town of Ajata-Aboki, according to local media outlets.

The attackers also killed six civilians and kidnapped three foreigners working at the site, according to the reports.

In one of the latest attacks, motorcycle-riding terrorists struck a small farming town in Kachia County known as Kasan Kogi. They kidnapped 27 residents—21 women and six men, according to Ezekiel Garba, a pastor at the Chapel of Good News Church in Kasan Kogi.

The terrorists killed two residents and threatened to marry off the female abductees to their gang members within days of demanding 100 million Nigerian naira (US$240,818.78), he said.

“They said they will use our women to produce children that will, in turn, fight us,” said Garba, whose wife is among the abductees.

The attack occurred at dawn, he said, lasting two hours without intervention by the military. The distance from the nearest military station, the Kalapanzi Artillery Barrack Kakuri, is less than 15 miles, Barde said.

According to Garba, the band of 300 terrorists on motorcycles swooped in on the small farming town at 6.30 a.m., after a 30-man civilian guard group had finished a routine night watch.

“They split themselves throughout the village—some went and circled an Evangelical Church Winning All in the center of the town where 15 women were attending a morning fellowship,” he said.

“They shot the pastor of the church—Rev. Ezra Shamaki and another person within the church premises and kidnapped 14 of the women who could not escape. Among the women kidnapped was the wife of Pastor Ezra.

“Another group chased and took me, my wife, and my daughter at different locations. They later released me and my daughter who … recently gave birth and asked me to go and mobilize a ransom.

“They went on to kidnap six others—five females and one male in one village close to us called Gora.

“We told them we cannot pay the amount they are demanding. They have stopped us from going to the farms, and we don’t have any source of income.”

His colleague at the Chapel of Good News Church in Kasan Kogi, Pastor Andrew Garba—whose wife is also being held—told The Epoch Times, “This is the second time my family members are being kidnapped this year, and I don’t have anything left.”

Two days before the attack, a similar raid on a complex of villages known as Rubu in nearby Kajuru County on June 19 saw 36 residents kidnapped. They included 31 females, according to Jonathan Asake, president of the Southern Kaduna People’s Union (SOKAPU).

Three people were killed in the attack on Christian worshippers on a Sunday morning, he said.

The Epoch Times had reported an earlier attack on June 5 on the towns of Dogon Noma and Maikori in the same county.

In that incident, terrorists firing from a helicopter killed 33 people and kidnapped 27 others. The abductees were predominantly female, according to Asake.

“They kidnap women and turn them into sex slaves,” he said. “Many of the women have returned traumatized with many of them dying after being released.”

Approximately 320 miles away in Kebbi state, Epoch Times reporter Beloved John interviewed villagers who said dozens of women kidnapped in the terrorist-ridden eastern part of the state have returned pregnant.

“People don’t talk about them,” John said. “They are scared of stigma.”

In nearby Sokoto state, where terrorists are taking towns and standing up to their own governments, husbands are forced to share their wives with bandits and remain silent, according to reporters speaking to The Epoch Times.

“They mostly come into towns and … demand that men release their wives to them, or they will be killed,” said one reporter, Mansur Buhari who’s also a lecturer at the Sokoto State University. “Sometimes they chase all men from a town and rape all the women there.”

A former county chairman in Sabon Birni County, Idris Gobir told The Epoch Times, “The raping of women by terrorists has become part of everyday life in Sabon Birni and Isa [areas].”

Gobir is currently standing to represent Sabon Birni in the Nigerian House of Representatives.

“On a particular day in one village, they lined up more than 100 women and raped them in front of their husbands,” he said.

In November 2021, Gobir said terrorists gang-raped more than 20 women in a mosque in a town called Allakiru in Sabon Birni County.

The incident has been confirmed by an Islamic cleric in Sokoto—Sheikh Bello Yabo.

“These terrorists captured women in a particular village and raped them in a mosque,” Yabo said.

He berated President Muhammadu Buhari for failing to protect citizens in Sokoto.

Police and officials of the National Agency for the Prohibition of Trafficking in Persons (NAPTIP)—an agency that tracks and prosecutes trafficking offenses—didn’t provide the information requested by The Epoch Times.

An agency official who identified as Rose Paul—replying to one of The Epoch Times’ emails wrote—“I am directed to inform you that the statistics showing trends in trafficking can be retrieved from the agency’s website.”

The Epoch Times found that of 1,112 trafficking cases reported on the website in 2021—the latest figures published by the agency, none were reported as a case of sex slavery involving terrorists.

The U.S. State Department in its 2021 Trafficking Report on Nigeria links this to corruption and a lack of coordination among relevant agencies.

Sex slavery is a predictable strategy by terrorists aimed at repopulating their groups, wrote Elizabeth Baklaich, a human rights educator and Christian rights activist in Washington.

“This is a pattern of terrorism we have seen before,” Baklaich told The Epoch Times in a text message.

“We understand the how and why, so what makes us incapable of keeping history from repeating itself, protecting the innocents, and helping those who are facing brutal persecution, rape, and slaughter?”

She condemned the silence of the U.N. and other governments.

The Nigerian government is helpless or is unwilling to help, according to Andrew Boyd, a British activist and spokesman of Release International.

“This has grave implications for the whole of Africa,” Boyd wrote in an email to The Epoch Times. “The culture of impunity is spreading; and the repercussions for Nigeria and its citizens, already horrific, are set to worsen.”