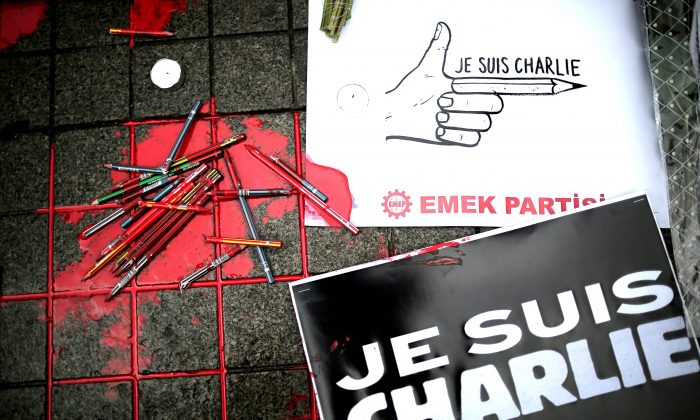 Broken pens and placards that read: "I am Charlie" lay on the ground as members of a leftist party gather outside the French consulate to pay tribute to the victims of the French satirical newspaper Charlie Hebdo, in Istanbul, Turkey, Friday, Jan. 9, 2015. 12 people were killed on Jan. 7 in a terrorist attack at the Charlie Hebdo headquarters in Paris. (AP Photo/Emrah Gurel)
Europe

Sigolene Vinson, a freelance journalist who was in the Charlie Hebdo’s office when terrorists killed 12 people, says she wasn’t killed because she’s a woman.

Vinson recalled one of the terrorists aiming his gun at her but then deciding not to shoot her.

“I’m not killing you because you are a woman and we don’t kill women, but you have to convert to Islam, read the Koran, and wear a veil,” she recalled him saying, reported Radio France International.

Soon after the man left, shouting “Allahu akbar,” which means God is great in Arabic.

Of the 12 people who died in the attack, 11 were men. The sole female victim was Elsa Cayat, a a psychiatrist and psychoanalyst who wrote a column for the paper.

Vinson said that the gunman also told her to “think about what you’re doing. It’s not right.”

The gunman turned to his partner, she told the New York Times, and shouted “We don’t shoot women!”

Of the three suspects, two were identified as brothers Cherif and Said Kouachi. They were killed on Friday in a police raid on a printshop where they were holding a hostage.

The third man turned himself in to police.