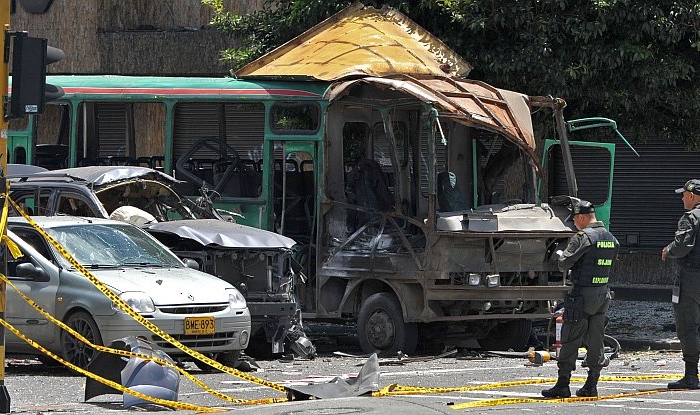 Police officers inspect the wreckage of vehicles after a bomb attack on the motorcade of Colombia's former Interior and Justice Minister (2002-2004) Fernando Londono. The ex-minister was injured and two people were killed in the attack. (Guillermo Legaria/AFP/GettyImages)
World

BOGOTA, Colombia—Terrorists in Bogota, Colombia, attacked the motorcade of the former minister, seriously injuring him on Tuesday. Earlier the same day, a car bomb was found and safely detonated elsewhere in the city, which authorities believe was planted as a decoy to distract attention from the attempt to assassinate former Justice and Internal Affairs Minister Fernando Londono.

As the city was buzzing about the disabled car bomb, the explosion in an uptown commercial district created mass chaos with people running and screaming in a scene the Colombian capital has not witnessed in a decade. The driver and bodyguard were killed in the attack and about 30 others were injured.

A surveillance camera from a nearby hardware store caught the attack in action. The footage shows that as soon as the traffic light turned red, a man crosses the street passing behind the bus next to Londono’s black van. He then throws a package at the van, and immediately runs to the next intersection where he is picked up by a black motorcycle and heads south.

The suspect was described as a male wearing a wig, jeans, brown sweater, and white tennis shoes, about 5 feet 7 inches tall, with short black hair.

It has been confirmed that the van of the former minister had level five armor plating, which protected him from certain death. He was reported to be in stable condition after suffering cranioencephalic trauma, thorax trauma, and a ruptured middle ear.

One witnesses described a gruesome scene: “You could only see the legs of the bodyguard who was driving the former minister’s van, the rest of his body, was gone…”

The Marxist Revolutionary Armed Forces of Colombia, or FARC, guerrilla group is suspected of carrying out the attack.

Colombian President Juan Manuel Santos, on his way to Cartagena for a ceremony to mark the enactment of the Colombia-USA Free Trade Agreement, canceled the trip. In a televised address, Santos condemned the attacks saying they only seek to create panic, and asked citizens to be united against the terrorism. “We are working for the total elimination of the terrorism from the face of our beloved country,” he said.

Bogota Mayor Gustavo Petro, told citizens, “We truly believe this is part of a plan made for the entire city in an attempt to destabilize the citizens just the same day the Free Trade Agreement starts. Security is going to be taken to an extreme in order to avoid more incidents. It’s important to maintain calm everywhere in the city, but please report anything suspicious to the authorities.”

A range of security measures were announced by Bogota police and the government including, forbidding motorcycles to carry passengers, banning certain large vehicles, the installation of 19 control sites in the city, and suspending university classes and children’s activities.

“I ask the community to be calm and permit the progress of the investigations and the policemen work without any speculation,” said Police Gen. Rodolfo Palomino.

A special council has been called between the president, commanders of the army and police, and the ministers of the interior, defense, and justice to discuss the events.