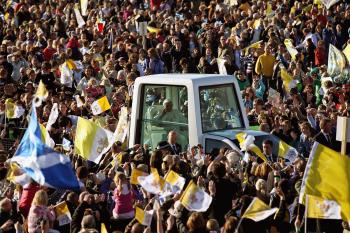 Pope Benedict XVI arrives for the Papal Mass at Bellahouston Park on September 16, 2010, in Glasgow, Scotland. The Pope is conducting the first state visit to the UK by a Pontiff. (Getty Images)
Europe

Six men were arrested and eight homes in North and East London-including two business premises in central London, one a street cleaning depot-were searched by police, according to the BBC.

“The men could have been joking, but they could also have been a viable threat. It was our job to make sure the Pope was not in danger,” a police source told the Mirror newspaper.

Two of the suspects, employed as street cleaners by Veolia Environment Services, a cleaning company contracted by Westminster Council, were overheard talking together in the canteen about what was interpreted as a possible terror attack on the Pope.

The cleaners had access to many parts of the Pope’s route before he arrived and could have potentially planted devices behind security barriers.

After thorough searches, no explosives or threatening items were found.

Papal spokesman Father Federico Lombardi is reported in the Mirror to have said, “We are grateful to the police for their work of prevention.”