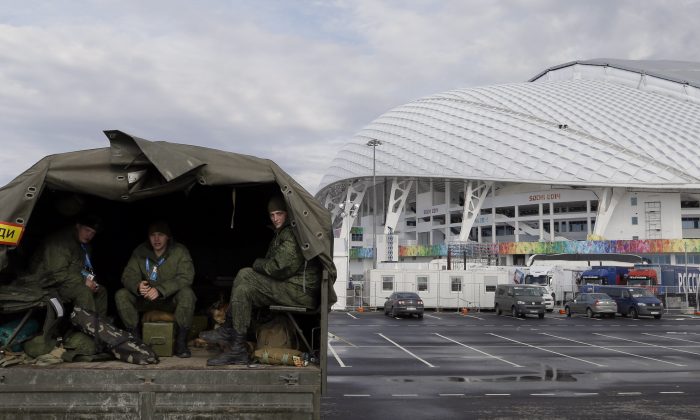 Security personnel sit in the back of a truck outside the Fisht Olympic Stadium in Sochi, Russia, Jan. 27, 2014. (AP Photo/David J. Phillip)
Europe

Terrorism Threat Ahead of Olympics Mounting

American concerns over security threats against next month’s Winter Olympics in Sochi are mounting, with a lack of cooperation by Russian security agencies complicating the ability to set up preventive measures.

Director of the National Counterterrorism Center Matthew Olsen told the Senate Intelligence Committee Wednesday that despite the extensive security at the sports venues in Sochi, there is a “substantial potential for a terrorist attack” in the greater Sochi area.

Russia is mounting a massive security operation for the Olympics, deploying more than 50,000 police and soldiers amid threats from Muslim insurgents from the nearby Caucasus region.

But the Olympic host has not been forthcoming in cooperating with security concerns of other nations, such as the United States. Only in recent weeks have U.S. and Russian security agencies been in touch to discuss the Sochi threat, even though the American Olympic delegation to Sochi, consisting of 230 athletes, is the largest.

Some Olympians have taken measures into their own hands and are hiring guards from private security firms. Also the United States is making its own contingency plans. American military vessels are standing by in the Black Sea for possible evacuations.

According to Abrahms the lack of communication by Russian security agencies is not surprising.

“I wouldn’t expect any country to cooperate entirely on counter-terrorism,” he said. “Russia, in particular, is a very secretive nation, and it’s still quasi-authoritarian.”

He also pointed out that the United States and Russia are “adversaries even on a good day,” which makes cooperation even more difficult. There is also, more pertinently, some hard feelings on the part of the Russians for the American criticism in the wake of the Boston Marathon bombings, when Russia didn’t share intelligence about the Tsarnaev family in a timely manner.

The blame does not rest entirely with Russia, however, Abrahms said, as the United States has also not been too willing to share, for instance, with its extensive know-how and technology on improvised explosive devices (IEDs). This is also understandable, as the United States does not want these countermeasures to fall into the wrong hands.

But does a lack of multilateral cooperation really increase the risk of a successful terrorist attack?

“To a limited extent,” Abrahms said. “But such concerns are on the margin. Russia is doing the very best job it can, and is really cracking down on terrorism. The problem has to do less with cooperation than the inherent ease of carrying out a terrorist attack.”

The Olympics, with its many foreigners clustered together and massive media attention, is just too attractive a target for terrorists, said Abrahms. The international attention also places limits on what Russia can do, such as restricting civil liberties too harshly, for instance.

In the North Caucasus Russian Republic of Dagestan alone, which Russia expert Ariel Cohen calls “the epicenter for Salafi-jihadi insurgents,” some 7,000 people have been killed in clashes between Russian law enforcement and militants, Cohen said in a blog post.

Yet, the very nature of the threat makes it hard to predict attacks and protect oneself accordingly. In the end, although Russia, the United States, and Israel are probably among the more favored targets, who actually gets hurt—if there is an attack—might just come down to sheer opportunity and coincidence, Abrahms said.

“[The terrorists] won’t have an infinite array of choices,” he said. “It will be indiscriminate. No foreign delegation is safe.”