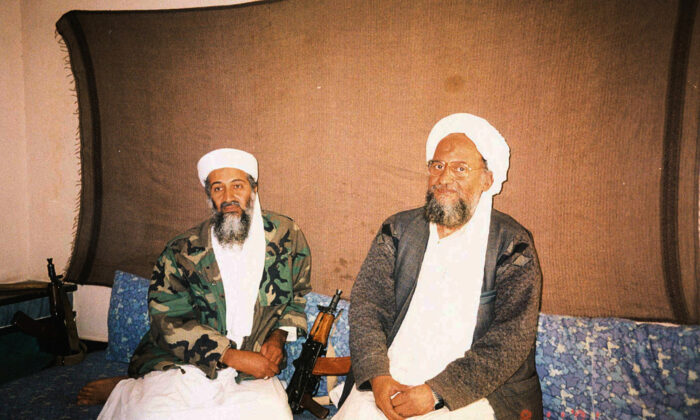 Osama bin Laden (L) sits with his adviser Ayman al-Zawahiri (R), an Egyptian linked to the al Qaeda terrorist group, during an interview with Pakistani journalist Hamid Mir (not pictured) in an image supplied by Dawn newspaper on Nov. 10, 2001. (Hamid Mir/Editor/Ausaf Newspaper for Daily Dawn/Handout via Reuters)
Afghanistan

While terrorism experts praised the CIA’s killing of al-Qaeda leader Ayman al-Zawahiri in Afghanistan, they noted that it means the terrorist group has returned to the war-torn country where they allegedly planned the 9/11 attacks.

On Monday evening, President Joe Biden announced Zawahiri was killed and that “justice has been delivered.” The Al-Qaeda leader became the head of the terrorist network following the death of former leader Osama bin Laden in 2011.

Amid last year’s chaotic pullout from Afghanistan, Biden declared that al-Qaeda is out of Afghanistan and added that in 2001, the United States invaded the country “for the express purpose of getting rid of al Qaeda in Afghanistan—as well as—getting Osama bin Laden. And we did.”

Analysts and some U.S. military officials have warned that the pullout from Afghanistan as well as the Taliban takeover of the country would possibly again turn it into a hotbed for Islamic terrorism.

Biden noted that Zawahiri “moved to downtown Kabul to reunite with members of his immediate family” earlier this year, suggesting that the Taliban-ruled government did little to prevent him from returning to Afghanistan.

“The Taliban was supposed to prevent Al Qaeda leaders from hiding out there for goodness sake,” Abrahms wrote on Twitter, referring to assurances that were given by Biden administration officials last year.

After the killing, Secretary of State Antony Blinken accused the Taliban of violating an accord between the group and the United States by hosting and sheltering Zawahiri in Kabul.

“In the face of the Taliban’s unwillingness or inability to abide by their commitments, we will continue to support the Afghan people with robust humanitarian assistance and to advocate for the protection of their human rights, especially of women and girls,” Blinken said in a statement.

After a decade of evading extensive U.S. intelligence operations, Zawahiri was ultimately “killed on a balcony in a wealthy downtown neighborhood of Kabul–it just shows what a drastic sense of empowerment al-Qaeda leadership has felt under Taliban-ruled Afghanistan,” wrote Rita Katz, the head of SITE Intelligence Group.

“The killing of Al Qaeda emir Ayman al Zawahiri will be sold as a counterterrorism success. But that narrative masks the undeniable truth that Taliban-controlled Afghanistan is a safe haven for Al Qaeda,” Bill Roggio, a terrorism analyst at the Long War Journal, wrote on Twitter.

He noted that Zawahiri was killed in Kabul’s Sherpur neighborhood, inside “a home run by a deputy of Sirajuddin Haqqani,” adding, “Sirajuddin is of course one of two deputy Taliban emirs as well as the interior minister.”

“Zawahiri could not operate in Afghanistan—particularly in Kabul—without the consent of the Taliban. He wasn’t in the remote mountains of Kunar, Nuristan, or Nangarhar, or distant provinces of Ghazni, Helmand, or Kandahar,” Roggio wrote.

“He was in the Taliban’s capital.”