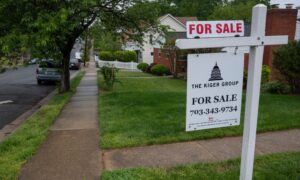 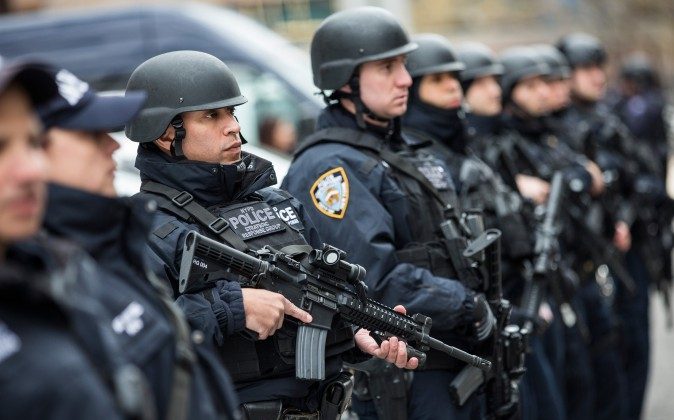 Members of the NYPD Strategic Response Group, which is funded in part through the Urban Area Security Initiative grant, stand outside NYPD headquarters in New York City on Feb. 17, 2016. (Andrew Burton/Getty Images)
Opinion

Terrorism is a depraved abomination representing the worst of humanity and a desecration to all that is moral, dignified, and honorable.

Each act of terrorism is a depraved assault against human rights and an act of cowardice.

It is a savage, brutal, and heinous barbarity that only cultivates suffering, brokenness, and sorrow.

The acceleration of terrorism acts throughout the world, inflicting unimaginable anguish to nations, communities, families, and individuals, demands condemnation from all people of good will, a full force resolve from every government, and the leadership of America.

The acceleration of terrorism acts throughout the world … demands condemnation from all people … and a full force resolve from every government.

Recent acts of terrorism throughout the world demanding America’s leadership, include the following horrific, senseless, and reprehensible massacres:

Mar. 27: At least 72 people are killed and over 300 injured by a suicide bomber in Lahore, Pakistan. The terrorist targeted Christians, including children who were celebrating Easter near a playground.

Mar. 22: Three coordinated nail bombings occurred in Belgium; two at a Brussels airport, and one at a Metro Station. At least 35 people were killed and 340 injured.

Feb. 21: At least 83 people were killed and 180 wounded, including children leaving school, at a shrine in Syria.

Nov. 13, 2015: At least 130 people are killed and hundreds wounded during attacks in Paris by terrorists armed with assault rifles and explosives that targeted six locations throughout the city.

In my article titled “Paris Terror Demands America’s Vigilance,” published in the Nov. 19, 2015 edition of Epoch Times, I argued that after the “contemptuous terror attacks throughout Paris on Nov. 13, 2015, America must enhance security awareness, training initiatives, protocols, and collaboration.”

The article honors the extraordinary dedication of the NYPD especially with the Critical Response Command (CRC), a new elite unit representing one facet of the department’s protection of high-profile targets throughout the city.

The CRC is complemented by the Joint-Terrorism Task Force, a top-notch group of over 100 NYPD detectives working with the FBI; and the NYPD Counterterrorism Bureau, Intelligence Bureau, Domain Awareness System, and NYPD SHIELD.

The NYPD dedication is complemented by private security professionals that include protection efforts at museums, financial institutions, corporations, hospitals, properties, schools, residences, and colleges throughout the city.

But as acts of terrorism accelerate throughout the world; with the possibility of additional attacks here on our homeland, we must intensify our law enforcement, private security, and community collaboration. This unity of effort is critical for the protection of our nation, communities, and the very morale of America.

The continuous terrorist acts throughout the world prove that there are evil individuals ready to desecrate humanity’s moral code of respect for our neighbor, and America must exercise the leadership and moral courage to eradicate the threat.

Numerous politicians, as well as presidential candidates, are responding to the fears of terrorism by recommending law enforcement initiatives.

Recommendations are only viable when there is consultation with respected law enforcement leaders, as the security of America demands collaboration, not inflammatory rhetoric.

The NYPD commissioner, William Bratton, has expressed his thoughts on the importance of not exploiting terrorism tragedies for political gain, especially his rightful condemnation of anyone calling for police to “patrol and secure Muslim communities before they become radicalized.”

Bratton’s credentials deserve attention and his advisement includes the following:

“We already patrol and secure Muslim neighborhoods, the same way we patrol and secure other neighborhoods. When people call the police, we rush to help them. When people break the law, we move to arrest them. But no, we do not single out any populace, black, white, yellow, or brown for selective enforcement. We do not ‘patrol and secure’ neighborhoods based on selective enforcement because of race or religion, nor will we use the police as an occupying force to intimidate a populace or a religion to appease the provocative chatter of politicians seeking to exploit fear… In New York City, we protect all communities from crime and terrorism—yes, Muslim communities too—because like us, they are Americans who own businesses, work hard, pay taxes, and dream of a better life for their children. Over 900 of them work in my police department as police officers, many of them in counterterrorism and intelligence. Many of them have served in the military and fought for their country. We police our city not by campaign slogans or inflammatory rhetoric, but by an old piece of parchment called the U.S. Constitution and another called the Bill of Rights.”

The department also warns that “U.S. citizens should exercise vigilance when in public places or using mass transportation. Be aware of immediate surroundings and avoid crowded places. Exercise particular caution during religious holidays and at large festivals or events.”

America must also be vigilant here at home enhancing our situational awareness and hardening our targets, as these are essential qualities mandatory to safeguarding our homeland.

We must also have the moral courage to cultivate a unity of effort between public and private sectors, and every community member, with an enhanced dedication to building faith-based partnerships, critical to reawakening the nation.