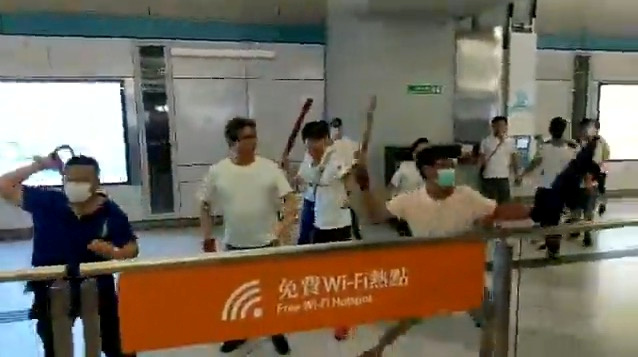 Men in white T-shirts and face masks attack anti-extradition bill demonstrators and reporters at a train station in Hong Kong, on July 21, 2019, in this still image obtained from a social media live video. (Courtesy of Stand News/Social Media via Reuters)
Chinese Regime

The situation in Hong Kong is becoming more intense after violent gangster attacks against peaceful protesters on July 21. A Chinese analyst says it’s a reflection and manifestation of internal power struggles in Beijing, and Xi Xinping is at another crossroad.

Who Organized the White-Shirt Attacks?

During the night of July 21, after 430,000 Hongkongers had finished their peaceful march, hundreds of men wearing white shirts and masks suddenly started to randomly attack civilians, journalists and Legislative Council members of the pro-democracy camp at a subway station in Hong Kong’s northwestern district of Yuen Long. Forty-five people, including several journalists, were injured, with one being in critical condition.

Who organized these attacks? Why did the attackers act in such a high profile way and create an atmosphere of terror? Who is their target audience?

Where Was the Police?

The violent attacks in Yuen Long went on for several hours without any police intervention. Some people dialed the “999” emergency number to alert the police, but nobody answered their calls. Eyewitnesses said that police officers that happened to be at site where the white-shirt gangs were beating up people, turned away and left without doing anything.

Johnny Mak Ip-sing, a Yuen Long District Councillor, said he received alerts in the morning of July 21 that criminal gang members were probably paid “to do things” in Yuen Long. He contacted the police, and was told that they were already prepared for it. However, no police showed up during the attacks.

Videos posted on the Internet show that after the attacks, the white-shirt assailants were allowed to leave with their wooden poles and bamboo sticks after communicating with police officers, who did not check their IDs, as they did with other demonstrators. Nor did the police confiscate the assailants’ weapons.

This video circulating is of Junius Ho, the former president to of the HK law society and a lawmaker shaking hands with the people waving China flags in Yuen Long pic.twitter.com/Q2kXeg03y1

One short video shows that before the white-shirt gangs were about to set out to do their task, Junius Kwan-yiu Ho, a pro-Beijing lawmaker, shook hands with many of them and said something to the effect of, “thank you for your hard work.” One white-shirt man told Ho, “You are my hero.”

According to Washington based China expert Ji Da, former vice President of China Zeng Qinghong and his supporters have been working on cultivating the gang community in Hong Kong ever since 2003, when Zeng was appointed as the head of the Central Coordination Group for Hong Kong and Macau Affairs. Since then Zeng has been establishing a spy network in Hong Kong as well.

Zeng has been referred to as former party general secretary Jiang Zemin’s “fixer.” For years, Zeng was the primary force behind the Chinese Communist Party’s organization and personnel.

In recent years, Hong Kong has become a focal point of the power struggle among the top leaders of the Chinese Communist Party. Jiang’s faction has been creating chaos in Hong Kong. Once Zeng said publicly in a meeting, the more chaotic the situation in Hong Kong was, the easier it was for the Party to do its job there.

The Timing of the Attacks

The violent attacks in Yuen Long happened at a sensitive time, just when Xi Jinping was going to hold Vice Premier Han Zheng accountable for the situation in Hong Kong.

Who gave orders to the Hong Kong government to issue a statement in support of the Extradition bill after the June 9 march that was attended by over a million people? And second, who ordered the Hong Kong police to use violence against the protestors on June 12?

According to Apple Daily, Beijing was greatly shocked by the situation in Hong Kong, and Han Zheng, as the current head of the Central Coordination Group for Hong Kong and Macau Affairs, had to go to Shenzhen twice within 15 days to handle the out-of-control situation.

It was reported by Apple Daily that Xi Jinping was very angry with the Liaison Office and the misjudgment of the situation by the Hong Kong and Macao Affairs Office, and planned to look into who should be held responsible.

The Apple Daily report also said that Xi was not happy with the Central Coordination Group for Hong Kong and Macau Affairs, headed by Han Zheng. Many departments in Beijing were collecting information; and Beijing was preparing to adjust its Hong Kong policies, the report said.

While Beijing was sending signals that it might hold Han Zheng and other officials in the Hong Kong and Macao Affairs Office accountable, the white-shirt attacks in Yuen Long happened, making the situation more complex.

A Repeat of the Lei Yang Incident?

Since taking power, Xi has been in a fierce power struggle with the Jiang faction, and his anti-corruption campaign was mainly aimed at clearing out Jiang faction members. While partly accomplishing this task, it also created a dilemma for Xi, as the remaining Jiang forces have been causing a lot of trouble for him domestically at key moments. The Lei Yang incident is one example.

On May 7, 2016, Lei Yang, a Chinese environmentalist, died suddenly following an altercation with police in Beijing’s Changping District. The suspicious circumstances surrounding his death led to accusations of police brutality, and caused a lot of public anger.

According to Beijing insiders, Xi Jinping ordered the police officers responsible for Lei Yang’s death be held accountable. As a result, five police officers were arrested. Xi also wanted to use this opportunity to overhaul the corrupt law enforcement system.

However, Xi’s efforts encountered a huge push back from the police system. Over 4,000 police officers in Beijing wrote a joint letter to the top officials in Beijing, threatening to resign.

In this kind of circumstance, Xi worried that Beijing could fall into chaos should the Beijing police use unrestricted warfare methods to create terror attacks in Beijing, similar to the one that happened at the Kunming railway station in 2014 that left 31 civilians and four perpetrators dead and over 140 others injured.

As a result, Xi gave in at the last moment. Thus the Lei Yang incident was never investigated, and there was no justice for Lei Yang.

It was alleged that the man pulling the strings behind the Beijing police system at the time was Jiang Zemin’s henchman Fu Zhenghua, who was the deputy minister of the Public Security Ministry then.

The Lei Yang incident is said to have been a turning point in the power struggle between Xi’s and Jiang’s rivaling factions. Since then, Xi’s public support, which had grown during his anti-corruption campaign, has gone downhill. In the meantime, Jiang’s faction has made a comeback.

Analysts say that right now, the situation in Hong Kong has drawn a lot of international attention, just as Lei Yang’s death in 2016. The white-shirt gangster attacks in Yuen Long are similar to the joint letter protest from the 4,000 police officers in Beijing. Both had the intention of thwarting Xi’s efforts to deal with the situation.

Again, Xi is at a crossroad and faced with a decision. And this time, Hong Kong’s future hangs in the balance.