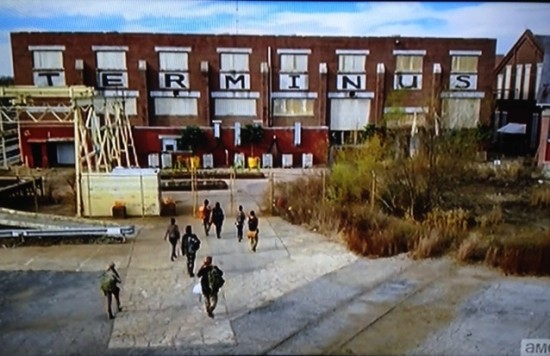 Some of the group in The Walking Dead have finally made it to Terminus. But who exactly is Mary, are the residents cannibals, and, really, what is this place all about?

Let’s check out what we know so far, including possible spoilers, especially for those who haven’t seen all the episodes so far.

1. Some Of The Group Finally Made It To Terminus

Glenn’s bigger group–which now includes Maggie, Bob, and Sasha in addition to Abraham, Eugene, Rosita, and Tara–all made it to Terminus at the end of season 4 episode 15.

They behold a huge building with the word “Terminus” plastered across it in neat block letters and a bunch of flowers growing near the entrance. The weirdest part? They don’t see any people other than Mary, who steps out from behind a grill to greet them. There were no guards posted, only a sign that said people need to lower their weapons to come inside.

Mary immediately welcomes the group and says that they will be served food.

2. Mary May Have Been The Woman Pictured In A Disfigured Photo Frame That Michonne Saw

Michonne and Carl were looking through houses when they and Rick were holed up at the house following the exit from the prison.

In one house, Michonne came upon a portrait that had been disfigured, with blood spread over it, and the word “no” written several times.

The portrait appears to serve as a warning to people who come across the person in it. Later, Michonne found a group of people dead in another room.

Another painting in the house was of a sunflower. There’s lots of sunflowers growing at Terminus.

The people at Terminus were broadcasting a message over the radio, alerting survivors of their alleged safe haven. Daryl, Michonne, Bob, and Tyreese heard the alert when they were driving to pick up drugs when the people at the prison had the disease. They had to ditch the car after walkers surrounded it.

The people at Terminus also placed signs in a fairly wide radius around the area. Rick, Michonne, and Carl saw a sign at one place off the railroad tracks, while Maggie, Bob, and Sasha–and later Glenn–saw several signs off the tracks that appeared to cover a fairly large area. Carol and Tyreese haven’t seen a sign yet but were told by a dying man of the safe haven, indicating that word has spread about Terminus.

The signs read: “Sanctuary for all. Community for all. Those who arrive survive.” They also included a big map.

4. Rick, Michonne, and Carl Arrive at Terminus in the Season Finale–With Others

Thanks to a brand new promo trailer out of New Zealand, we know that the trio make it to Terminus at some point–and they are with three others, who appear to know their way around.

The six walk straight in and go up to Mary. Whether it’s right after this or at another time, Rick does not look happy, demanding: “Where are our people?”