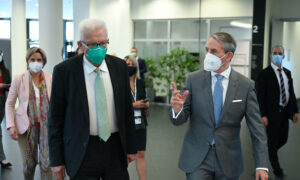 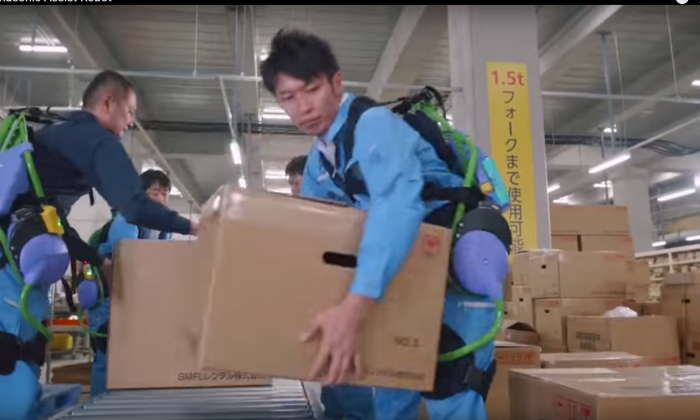 Terminators in the Warehouse—robot-Assisted Employees Power Through the Job

Mechanical exoskeletons that help people lift heavy weights, run or walk up steep or uneven terrain, or provide mobility to the disabled, are being used to help the large and growing elderly population in Japan.

Some 27 percent of Japan’s citizens were over 65 in 2016, according to the CIA World Factbook, compared to 15 percent in the United States and 10 percent in China.

The Ueda Group, which does distribution and storage management, has been using Panasonic’s Power Assist Suit (AWN-03) at its distribution center in Kawasaki, where employees have to lift and move heavy objects.

The suit senses a person’s motion, activating motors that help a person straighten up through electric power and by taking the pressure off the lower back and redistributing it to the thighs. Panasonic said the suit can reduce stress on the lower back by 33 pounds.

Over half of Ueda’s 100 employees at the distribution center use the suit. Employee Hiroaki Okutani, 57, was the first to one to adopt it.

“I was diagnosed with a slipped disc last year. While it has healed, I’ve worked very carefully ever since,” he said. “But wearing this [Power Assist suit], I can continue to work without worrying much about it,” said Okutani.

He said he hopes to keep working as long as his body lets him, and this suit may be able to extend that time.

Yuichi Hayashi, the head of logistics at Ueda, said the Power Assist Suit is also at least a partial solution to the problem of Japan’s aging workforce.

“To be honest, it is best to employ younger people because of their physical capabilities,” he said. “However, as it gets harder to secure those young workers due to the shrinking and ageing population of workers, in this situation, people in their 40s and 50s become our core labor force on the work floor.”

Panasonic released the Power Assist in 2015. It is also developing the “Ninja” or PLN-01 to help with walking or running up steep terrain and the “Power Loader” that has sensors in the feet and hands that power 20 motors to assist with physical labor. The company is also developing robotics that can help caregivers of the elderly move patients, and self-reliance technology that will help the elderly and disabled move without aid.

“Our mission is to help realize a power barrier-less society by offering a helping hand during manual labor and at other worksites,” said Hiromichi Fujimoto, president of Activelink Co., Ltd., the venture company owned by Panasonic that has been working on its exoskeletons.