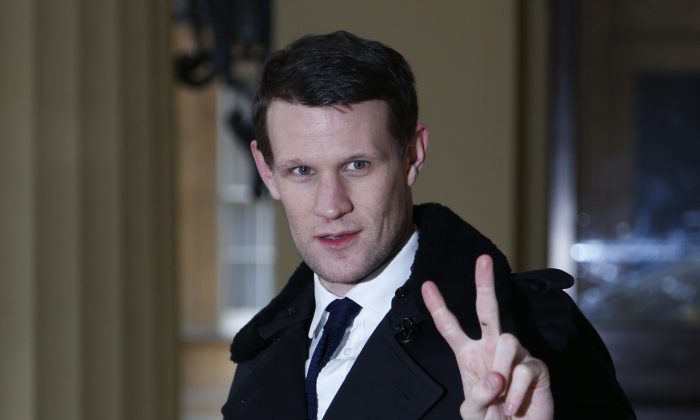 British actor Matt Smith, the eleventh incarnation of the Doctor role in the British television series Doctor Who, poses for the photographers as he arrives for a reception at Buckingham Palace, in central London, Monday, Nov. 18, 2013. Britain's Countess of Wessex hosted a reception to mark the 50th anniversary of the series. There have been 11 Doctors to date, and it now holds the Guinness World Record for the longest running science fiction series in the world. (AP Photo/Lefteris Pitarakis, pool)
Entertainment

‘Terminator: Genesis’ Adds Matt Smith, Star of ‘Doctor Who,’ to Cast; Smith Will Have Major Role

Smith will be joining the cast of Arnold Schwarzenegger, Emilia Clarke, Jason Clarke, J.K. Simmons and others in the James Cameron-written film.

Paramount Pictures made the announcement via their Facebook page on Friday morning, May 2, 2014, saying that “Smith will play a new character with a strong connection to John Connor.” The plot of the new Terminator film has not been announced.

Smith’s credits include his best known role in the “Doctor Who” series during the seasons 2011-2013. He’s also played roles in “Christopher and His Kind,” “Moses Jones,” and “The Street.”

His most recent upcoming on-screen appearance will be in the Ryan Gosling-directed fantasy thriller, “Lost River,” which also stars Christina Hendricks, Saoirse Ronan, and Eva Mendes.