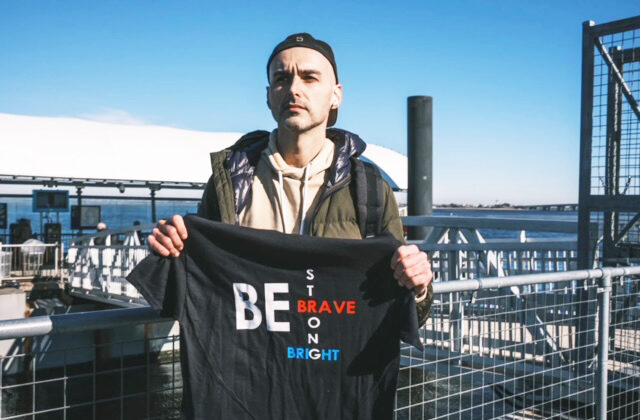 Terminated NYC sanitation worker, Tom Libretti, on his way to a rally at city hall on Feb. 11, 2022. (Courtesy of Tom Libretti)
New York

NEW YORK—Tom Libretti, a sanitation worker, loves his job at the City of New York’s Sanitation Department, riding on the back of a garbage truck and tossing refuse from garbage cans into its back.

Or at least he did.

Libretti is one of the 1,430 employees of the City of New York who refused to get vaccinated for COVID-19 and lost his job last week.

“I feel that I should have a right to say what goes into my body. I feel like that is the only true possession that you have in your lifetime,” Libretti told The Epoch Times.

“I should have a decision in what I put into it and it shouldn’t impact my employment or my lifestyle in the United States of America.”

“Me, personally, I had no idea what a religious or medical exemption was. No one guided us through the process. So my first attempt at this was extremely arbitrary,” Libretti said.

He wrote a “heartfelt letter,” stating “it is not a true depiction of who I am to ask for religious accommodations or a medical accommodation when I don’t know if there’s anything there to begin with.”

The response was the letter is under review and he can continue working during that time.

The deadline to make an exemption request was Oct. 27, 2021. However, the Uniformed Sanitationmen’s Association, Local 831, was able to get an extension until Nov. 6. Libretti submitted his letter on Nov. 3.

After the review, Libretti was asked for a specific religious or medical reason. As a Catholic, he chose to go with the religious exemption.

A week later Libretti was put on leave without pay. He says the only employees who were put on leave were the ones who filed for an exemption in the days between Oct. 27 and Nov. 6.

“The guys that filed on the original October 27th date were allowed to resume work,” Libretti said. “Those that filed after the date weren’t.”

The Department of Sanitation told Libretti and the hundreds of other employees in his position that they could not file for unemployment insurance.

“It was at this point where I started feeling like they were really trying to suffocate us,” he said.

Libretti thinks most of his vaccinated coworkers “complied out of fear.”

On Jan. 31, Libretti received several text messages from his department stating he needed to report to a building in lower Manhattan the next day to sign a waiver. He asked his superiors what this was about and they told him to contact the union. The union confirmed he had until 1:00 pm the following day to go to a building he’s never been to before to sign a waiver he hasn’t seen.

He asked for documentation in writing for the demand and was told it was in the mail. The document arrived the next morning via United Parcel Service.

The waiver would keep him on unpaid leave until June 2022 in exchange for waiving his right to sue the city.

Libretti didn’t sign and he’s now the main plaintiff in a new lawsuit against the City of New York.

Libretti took issue with the union as well. “What the union fought for now makes no sense,” he said.

Regarding the extension, Libretti said, “They made it sound like what they did for us—they rode in on white horses and got us this extension—OK, well now we’re fired. Where are you guys?”

He had been working for the Department of Sanitation for four and a half years and is a second-generation sanitation worker.

In theory, Libretti could move his family from New York to a red state where they could keep their freedoms. He also has plumbing skills that can be used anywhere.

But Libretti is a native New Yorker and has his roots there, and that includes family.

So for the time being, Libretti is going to stay put and hope he wins the battle.

“It’s a great job,” Libretti said. “This is the job that I love and I want to fight for it.”