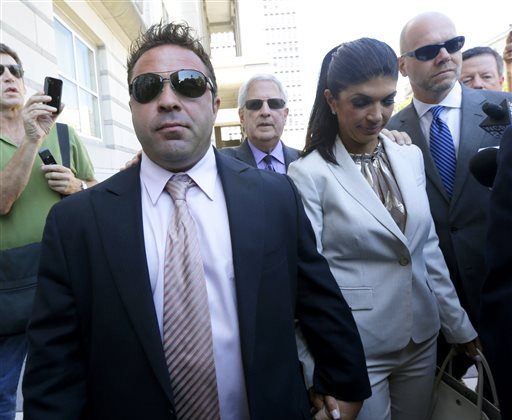 Giuseppe "Joe" Giudice, 43, left, and his wife, Teresa Giudice, 41, of Montville Township, N.J., walk out of Martin Luther King, Jr. Courthouse after a court appearance, Tuesday, July 30, 2013, in Newark, N.J. The two stars of the "Real Housewives of New Jersey" were indicted Monday on federal fraud charges, accused of exaggerating their income while applying for loans before their TV show debuted in 2009, then hiding their improving fortunes in a bankruptcy filing after their first season aired. They are charged in a 39-count indictment with conspiracy to commit mail and wire fraud, bank fraud, making false statements on loan applications and bankruptcy fraud. (AP Photo/Julio Cortez)
Entertainment

Teresa Giudice and Joe Giudice on Wednesday pleaded not guilty on fraud charges, it was reported.

CNBC broke the story on Twitter, saying they pleaded not guilty on all charges.

Their trial is slated for Oct. 8.

The two were charged with fraud several weeks ago and made bail.

The “Real Housewives of New Jersey” stars were charged July 29 with conspiracy to commit wire and mail fraud, bank fraud, bankruptcy fraud, and allegedly made false statements on loan applications.

“The investigation went on for a pretty long time and we are confident we have enough evidence to convict the defendants beyond a reasonable doubt,” U.S. Attorney Paul Fishman said in late July of the charges.