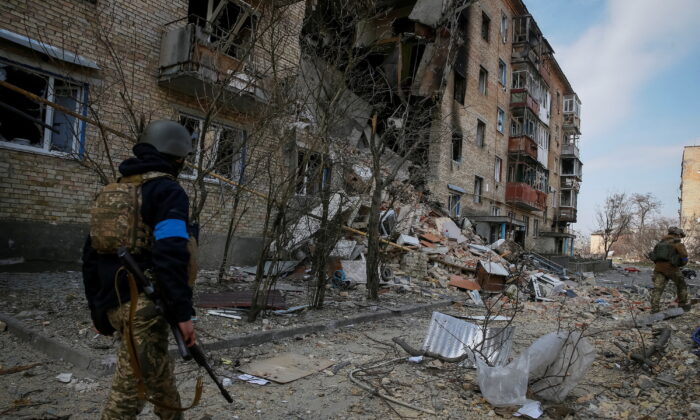 Ukraine’s recent proposal for NATO-style security guarantees, in which guarantor countries would commit to military intervention if Ukraine is attacked, has so far been met with little enthusiasm and few details.

Germany said it’s willing to provide some form of security guarantees but stopped short of committing to military intervention, while the White House said it’s in “constant discussions” with Ukraine on ensuring the country remains “sovereign and secure,” but it, too, has not made any military intervention pledge.

Poland has said it’s willing to serve as a security guarantor, and other Western countries have expressed broad support for some kind of security guarantees for Ukraine, but with few specifics so far, as discussions continue on a formula that would leave Kyiv assured it won’t be abandoned in case of a future attack.

No Repeat of Budapest Memo ‘Mistake’

Ukrainian negotiators on March 29 put forward a proposal for a mechanism similar to the Article 5 mutual-defense clause of the NATO treaty that considers an attack on one member to be an attack on all.

“We insist that this must be an international treaty signed by all countries—guarantors of security, which will be ratified, so as not to repeat the mistake that was once in the Budapest Memorandum,” said David Arakhamia, head negotiator for Ukraine, according to a statement.

Arakhamia was referring to the 1994 Budapest Memorandum signed by Russia, Ukraine, the United States, the UK, and others. The document pledged to ensure Ukraine’s territorial integrity in exchange for Kyiv agreeing to give up its vast nuclear arsenal. At the time, Ukraine had the world’s third-biggest cache of nuclear weapons.

But the Budapest pact stopped short of requiring guarantors to provide military assistance to Ukraine. As a consequence, Russia’s 2014 invasion, in which Crimea was seized and Russian troops entered Donbas, was met with a toothless response, in Kyiv’s view.

Wary of a new pact that would stop short of committed military assistance, Ukraine wants any security guarantees that are signed as part of a peace deal with Russia to be “concrete” and feature legally binding commitments from guarantors to intervene militarily.

“We want it to be a working international mechanism of concrete security guarantees for Ukraine,” Arakhamia said.

Only ‘Real Protection’ From Future Attack

Ukraine President Volodymyr Zelenskyy’s office said in a statement that it’s only interested in a security treaty that would “give it reliable allies and real protection from any new aggression in the future.”

Under the proposal, an attack on Ukraine would require guarantor countries to provide military assistance to Kyiv, including via arms shipments and enforcing a no-fly zone.

In the current conflict, Ukraine’s Western allies have been providing defensive weapons to Kyiv but have stopped short of shipping arms normally considered offensive, such as tanks and the much-discussed Polish MiG-29 jet fighters.

Zelenskyy has repeatedly called on Western allies to close the skies over Ukraine, but they have been unwilling to do so on the premise that it could lead to a direct confrontation between NATO and Russian forces and spark World War III.

Ukrainian presidential adviser Mykhailo Podolyak said in an online press briefing on March 30 that Ukrainian officials and a team of international lawyers were consulting with Ukraine’s potential future security guarantors.

While the pact would be open for any country to join, Ukrainian negotiators have specifically requested that permanent members of the U.N. Security Council serve as the main guarantors, as well as Turkey, Germany, and Poland.

Zelenskyy said he spoke by phone to U.S. President Joe Biden on March 30 and that they discussed military aid to Ukraine as well as security guarantees.

While Biden has yet to comment on the security guarantee proposal, White House communications director Kate Bedingfield said the same day that the administration is “in constant discussion with Ukrainians about ways that we can help ensure that they are sovereign and secure” but that there was “nothing specific about a security guarantee that I can speak to at this time.”

Germany’s Minister of Foreign Affairs Annalena Baerbock told state broadcaster ARD on March 30 that “if guarantees are needed, then Germany will be there and give guarantees,” adding that Berlin was “in full solidarity, 100 percent” with Kyiv.

But she didn’t specify whether the guarantees would extend to a NATO-style commitment to military intervention.

A German government spokesman said on March 30 that German Chancellor Olaf Scholz told Zelenskyy that Berlin was “broadly willing” to act as a security guarantor for Ukraine but that it was too early to discuss the details of what that would entail.

“We’ll consider anything Zelenskyy says he needs very carefully,” Raab told BBC radio on March 30. “But we’re not going to, I think, replicate unilaterally the NATO commitments that apply to NATO members.

“We’re not going to engage Russia in direct military confrontation.”

Poland’s secretary of state at the Chancellery of the President, Jakub Kumoch, told Polish media outlet TVP on March 30 that Poland stands ready to serve as a guarantor, though details remained scant.

“Poland is a responsible country, a brotherly nation to Ukraine, so we’ve agreed for Ukraine to include us in their proposal as one of the security guarantors,” Kumoch said.

Kumoch said that other NATO allies would be included in the group of guarantors and that, if push came to shove, “Poland would not be the only one defending Ukraine.”

Poland has been a staunch ally to Ukraine in the conflict, taking in the largest number of refugees fleeing the fighting as well as being a key supplier of arms to Kyiv.

The proposal “will be studied in the near future and reported to the president, and then Moscow will come back with a response,” he said.

A senior Ukrainian official said on March 30 that Russia and Ukraine would resume their peace talks online on April 1.