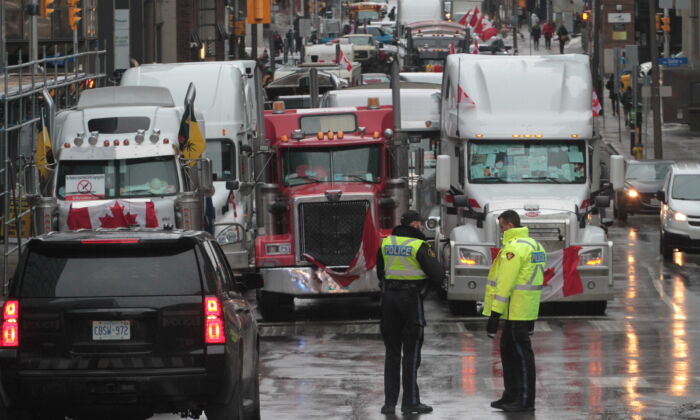 There is an increased police presence in and around the blockaded section of central Ottawa on Feb. 17, 2022. (Richard Moore/The Epoch Times)
Canada

Early on the morning of Feb. 17 work crews in Ottawa erected eight-foot high wire fences along the interior of the stone wall separating Parliament Hill from Wellington St, where the main body of trucks and protesters are gathered.

Authorities left only one or two gates open to allow people to get up on the open area.

At the same time, the number of extra police in the area was noticeable. The one car of past days was replaced by three police vehicles.

Foot patrols were increased in size from four or five officers to 10. The frequency with which they walked around the blockade was also boosted.

Police also handed out more warning notices to the truckers.

Dated Feb. 17, the document began, “We want to inform you that you will face severe penalties under provincial and federal legislation if you do not cease further unlawful activity and remove your vehicle and/or property immediately from all unlawful protest sites.”

In addition, protesters were told that their personal or business bank accounts may be subject to examination and restriction, including virtual currency.

“If you bring a minor [a person under 18] with you to an unlawful protest site, you may be charged and fined up to $5000 … or potentially spend up to five years in prison.”

Police added that people delivering fuel and other supplies to protesters could be charged, as could those traveling to join the demonstration.

Trucker Doug Day, from Kitchener, Ontario, told The Epoch Times he was unlikely to move when asked to by police.

Day has been on site for about six days and admits living in the small cab of his utility was not comfortable, particularly with his large three-legged dog Lucky with him.

“It’s a little rough sleeping in the truck but hopefully we can stop the overreach of the government.

“I’d like to see [Prime Minister Justin] Trudeau stand down. He’s the laughing stock of the world and he’s doing the wrong thing.

“History will not be kind to him.”