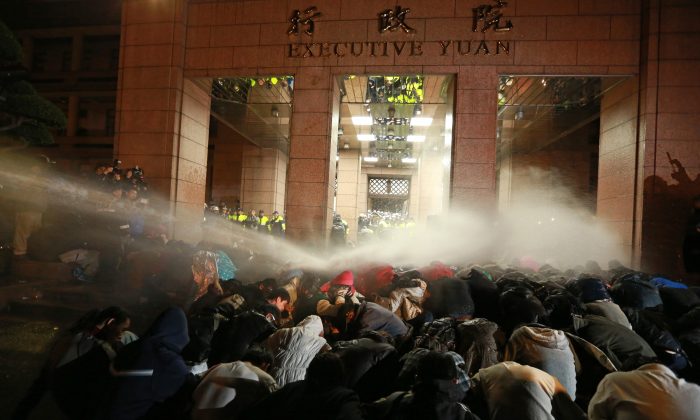 Protesters are sprayed by a water cannon during a demonstration outside the Executive Yuan in Taipei early on March 24. The protests followed Taiwan President Ma Ying-jeou's refusal to scrap a contentious trade agreement with China. (STR/AFP/Getty Images)
China

The atmosphere in Taiwan has intensified after the rough eviction of students from the executive building in the early hours of March 24. Scenes of violence erupted as some police lashed out with their batons at unarmed students. In the day following, people in Taiwan have been coming to grips with what occurred.

Clashes took place largely outside the Executive Yuan in Taipei, the capital of Taiwan, as riot police attempted to disperse students who had come to protest a trade pact with mainland China.

More than a hundred people were injured in the clash, and 61 protesters were arrested, according to Taiwan’s NextTV.

Strong public anger was triggered by the use of water cannons on thousands of protesters at around 4:30 a.m. As the day broke, more protesters from the capital and around the country came to show their support.

“This is bloody state violence in front my eyes. … It’s not acceptable to any of us,” said Lin Fei-fan, a student activist leader, standing in the Legislature on March 24. The video of her speaking to the camera was published on the website of Apple Daily, a popular newspaper on the island.

“The Ma Ying-jeou government should take the political responsibility for the violent dispersal of students. … They don’t ask why the students occupied the parliament and the Executive Yuan, why we take actions, why we are angry, and what we expect in the future. Instead, their response to the people’s appeal is to crack down with riot police using batons, shields, and water cannons.”

Lin asked the government to respond to the students’ appeals.

President Ma Ying-jeou of the ruling Nationalist Party, who was re-elected in 2012, gave a speech on March 23 indicating that the government would agree to a clause-by-clause review of the disputed trade agreement with China. He urged the students still occupying the Legislature to leave soon.

The response was hardly found satisfactory to the protesters, who now call for a complete rescindment of the pact and for President Ma to apologize for attempting to pass it without following agreed-upon review procedures.

They said it will decimate the Taiwanese economy by allowing mainland China, ruled by the Chinese Communist Party, undue sway. “We are very disappointed,” a protester told the official Central News Agency, after Ma’s press conference.  Student leaders said they won’t leave the Legislature until the agreement is withdrawn.

Wang Jin-pyng, the speaker of the Legislative Yuan that the students are occupying, is a political opponent to Ma Ying-jeou; he made the decision to allow the students to storm the chambers, and it is up to him whether police violently remove them.

The trade agreement between the Taiwanese government and mainland China was signed last June in Shanghai at a high-level meeting between the two sides.

Opposition parties and civil groups immediately raised concerns about the pact, called the Cross-Strait Service Trade Agreement, because it was devised without the participation of the Parliament or the wider public.

The pact has received the unwelcoming moniker of being a “black box project,” referring to its alleged lack of transparency.

On March 17, Chang Ching-chung, a lawmaker with the Nationalists, abruptly announced the completion of the trade agreement review before it had started. This triggered students to occupy the Legislature the next day.

More people have joined protests since the crackdown on March 24, including family members of the protesters, according to NextTV.

A large number of angry and worried parents and grandparents took to the streets Monday, condemning the government’s violent crackdown on their children. “Our children are not enemies!” “Is it still Taiwan?” they were quoted saying in Taiwanese reports.

Apart from the occupation of the Legislature, other protests were organized by students and citizens around Taiwan and the capital, Taipei, on Monday. Most of them called for the police to release arrested protesters, and refrain from violence.