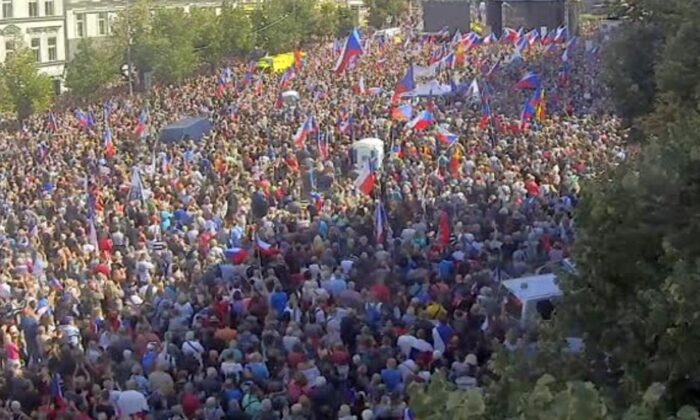 Czech police estimated that 70,000 people went to Wencelas Square in Prague to protest on Sept. 3, 2022. (Police of the Czech Republic / Twitter)
Europe

Tens of thousands of protesters took to the streets across the Czech Republic to criticize the government, NATO, and the European Union amid skyrocketing prices.

On Sept. 3, police estimated that 70,000 people went to Wenceslas Square in Prague to protest. The demonstrators were peaceful, according to police.

“The aim of our demonstration is to demand change, mainly in solving the issue of energy prices, especially electricity and gas, which will destroy our economy this autumn,” event co-organizer Jiri Havel told iDNES.cz news website.

The protest at Wenceslas Square in the city center was held a day after the government survived a no-confidence vote amid opposition claims of inaction against inflation and energy prices. The vote showed how Europe’s energy crisis is fueling political instability as soaring power prices stoke inflation, already at levels unseen in three decades.

Protesters demanded the resignation of the coalition government led by Prime Minister Petr Fiala, accusing it of kowtowing to the EU and NATO over a variety of issues. They said the government’s continued support of sanctions against Russia is driving up prices domestically while also accusing the EU of pursuing an extremist climate change-related agenda, according to reporters on the scene.

But Fiala told local media outlets that the protesters are actually acting against the interests of the country, accusing the organizers of being linked to Moscow.

“The protest on Wenceslas Square was called by forces that are pro-Russian, are close to extreme positions, and are against the interests of the Czech Republic,” he said, according to EuroNews.

The protest comes as Ukrainian President Volodymyr Zelenskyy said on Sept. 3 that Russia will plan to target Europe’s energy sector this winter.

“Russia is preparing for a decisive energy attack on all Europeans this winter,” Zelenskyy said.

Gazprom, the Russian state-owned energy company, placed a stop on the flow of gas via the Nord Stream pipeline last week, stating that it needed to carry out repairs on a gas leak compressor near St. Petersburg, Russia.

On Sept. 4, German Chancellor Olaf Scholz accused Russia of breaking “its contract” with Germany and the EU, saying it’s “no longer a reliable energy supplier.”

The German leader’s comments came as he unveiled a new $65 billion proposal that would provide financial assistance to individuals and companies dealing with soaring energy costs during the winter months.