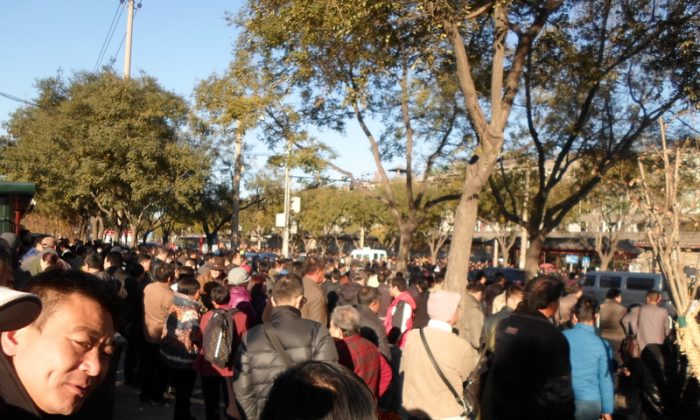 People line the streets outside the three petition office in Beijing, on Nov. 11, 2013. According to observers, tens of thousands of people were in Beijing to petition during the meetings of the Third Plenum of the 18th Central Committee. (Epoch Times)
China

Tens of Thousands Petition During Third Plenum in Beijing

A multitude of hopeless petitioners in China are in Beijing now, not because they actually think their grievance claims will be heard, but during the Chinese Communist Party’s Third Plenum of the 18th Central Committee, they hope at least, to get noticed. The sheer volume of people lining up is hard to ignore.

On Nov. 11, tens of thousands of petitioners swarmed in to register complaints at the three main petitioning bureaus in Beijing (the State Letters and Complaints Bureau, the Letters and Visits Bureau of the National People’s Congress, and the Central Discipline Inspection Commission Complaints Bureau), waiting in lines stretching along the roads.

In addition, there were more than one thousand petitioners gathered in front of the Supreme People’s Court in Beijing. Armed policemen and vehicles were on high alert.

Gu said he estimated the number based on concrete evidence.

“Yesterday, besides the petitioners lined up outside the three bureaus in Beijing, the flow of crowds on the two sides of the road was measured to be one kilometer long, with five or six in a row, extending from the reception window to the gate. The two sides of the road were swarming with petitioners, about 20,000 of them,” Gu said. “I spent hours observing them. There was an endless flow of crowds. Judging from this, there could be over 50,000 petitioners a day.”

Lin Mingjie, a petitioner from Shenyang City in Liaoning Province told the Epoch Times, “The crowds are packed in like sardines, there could be 20,000 people here (at the main petition office),” Lin said. “I took a group of 34 petitioners from Shenyang to register. There are also dozens of other petition offices in Beijing. The number of petitioners is unaccountable.”

Lin said the petitioners looked depressed. “There will be more tomorrow; they will start lining up at midnight, hoping that they can file complaints during the plenary session. It’s the routine now.”

On Nov. 11 over 1,000 human rights lawyers and defenders from all over China gathered outside the High Court’s petition office. They hoped to get registration forms in and an immediate response from the high court.

According to a witness, around 1,000 petitioners were sent away from the Letters and Complaints Bureau at 11 a.m. Some petitioners then proceeded to unfold their banners and petition letters on the spot for photos. Their cameras were snatched away by the police.

Typically, petitioners come to Beijing as a last resort, after having experienced various forms of injustice and corruption and gained no redress after appealing to their local governments.

The practice of petitioning the state for the relief of injustice dates back to imperial days.